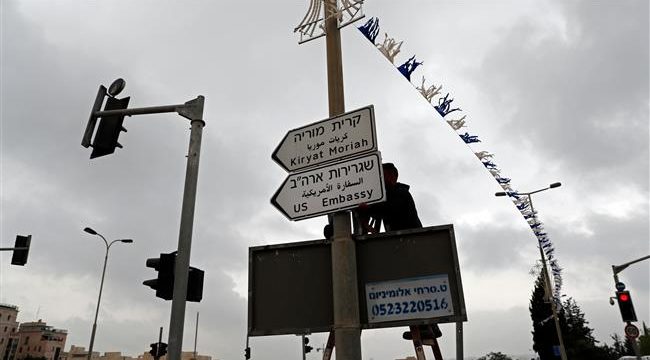 US Embassy road signs have been installed in Jerusalem al-Quds ahead the upcoming mission’s opening based on President Donald Trump’s recognition of the city as Israel’s capital.

The black-and-white signs, written in English, Hebrew and Arabic, were installed along roads heading to a US consulate building in the city’s southern regions.

The consulate is set to be remodeled as the embassy when it formally opens on May 14.

“This is not a dream. It is reality. I am proud and moved to have hung this morning the first new signs that were prepared for the US Embassy,” said Jerusalem Mayor Nir Barkat on Monday.

“This (embassy) move is not only illegal but will also thwart the achievement of a just and lasting peace between two sovereign and democratic states on the 1967 borders, Israel and Palestine living side by side in peace and security,” said Palestinian negotiator Saeb Erekat in a statement released on Monday.

The Israeli settlement watchdog Peace Now also slammed the move, stressing that it sabotages any opportunity for peace.

Also on Monday, Paraguay announced that it was planning to relocate its embassy from near Tel Aviv to al-Quds on May 21 or 22.

In March, Guatemalan President Jimmy Morales announced that his country would also move its embassy from Tel Aviv to Jerusalem on May 16.

“Under my instructions, two days after the United States moves its embassy, Guatemala will return and permanently move its embassy to Jerusalem,” said Morales.

The Czech Republic, Romania, and Honduras have so far said they would be moving in US footsteps.

At the beginning of the month, Japanese Prime Minister Shinzo announced that by no means his country will be moving its Israeli embassy to Jerusalem al-Quds.

On December 6, Trump defied global warnings and said Washington formally recognized al-Quds as the “capital” of Israel and would begin the process of moving its embassy to the occupied city, breaking with decades of American policy.

Trump’s declaration has sent shockwaves throughout the Muslim world and even prompted warnings from Washington’s allies in the West that it would bring more chaos to the region.

The United Nations General Assembly on December 21 overwhelmingly voted in favor of a resolution that calls on the US to withdraw its controversial recognition of Jerusalem al-Quds as the Israeli capital.

Washington, however, says the diplomatic mission will be relocated from Tel Aviv to al-Quds next month to coincide with the anniversary of the day in 1948 when Israel was proclaimed as an entity after a catastrophic war with Arab nations.