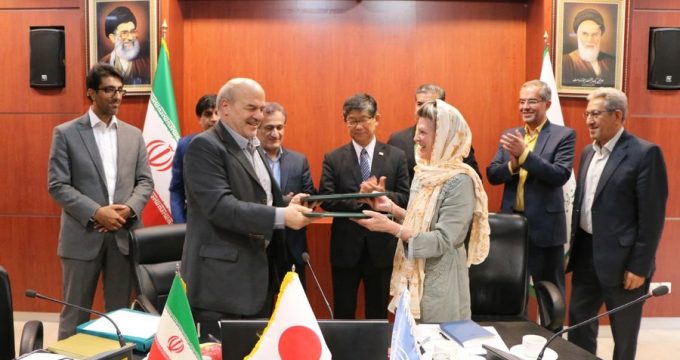 May 6, The Iran Project  – The Government of Japan has generously contributed another US$ 1 million to the United Nations Development Program (UNDP) Iran to continue supporting their efforts to contribute to the restoration of Lake Urmia. This is Japan’s fifth contribution.

The signing ceremony took place on 30 April at the Department of Environment (DoE) in the presence of Vice-President and Head of the DoE, Dr. Isa Kalantari along with the Ambassador of Japan in the Islamic Republic of Iran, Mr. Hiroyasu Kobayashi and UNDP Resident Representative a.i. Ms. Anne Marie Sloth Carlsen.

Annually, since 2014, Japan has been providing a grant of US$ 1 million to UNDP for the same purpose. The contributions are implemented as a component of UNDP’s ongoing Conservation of Iranian Wetlands Project – a project in which UNDP is partnering with Iran’s DoE.

The component is titled “Contribution to Restoration of Lake Urmia via Local Community Participation in Sustainable Agriculture and Biodiversity Conservation”. This new grant will enable the expansion of the project, fully aligned with the priority plans of the Government of Iran as well as the National Committee for Lake Urmia Restoration.

Lake Urmia is situated in northwest of Iran and is a key wetland of national and global importance. The amount of water feeding the lake has dramatically decreased in the past decade, due to mismanagement of water resources and the dryer and hotter climate that is affecting Iran because of climate change.

The contribution of this project to the restoration is mainly taking place through public participation to ensure water savings stemming from the promotion of sustainable agriculture in the farming communities adjacent to the saltwater lake. Here, local communities and farmers are engaging to apply new less water consuming irrigation techniques as well as techniques that reduce the use of pesticides and artificial fertilizers.

This approach has so far resulted in a water-saving of at least 35% which, in turn, will allow the “saved” water to return to the lake, thus replenishing it. At the same time, the use of fertilizers and pesticides has been reduced by 40%.  Through an integrated approach, the project is also modeling Alternative Livelihoods, Women Micro-Credit Funds and Payment for Ecosystem Services (PES) as complementary mechanisms for job diversification and better adaptation to climate change impacts in the area.

Originally the project was initiated in 41 villages around the basin of the lake. The second phase covered 75 villages. In the third phase this number increased to 90 villages. In the fourth phase of the project 110 villages were covered. This new contribution will expand the area covered with these techniques to cover an additional 20 villages representing 130 villages in total.

The project has been fully welcomed by the local communities in the past four years. The Department of Environment, the Governors-General of West and East Azerbaijan Province as well as Ministry of Jihad Agriculture are also fully engaged in the successful implementation and utilization of the Japanese funds.