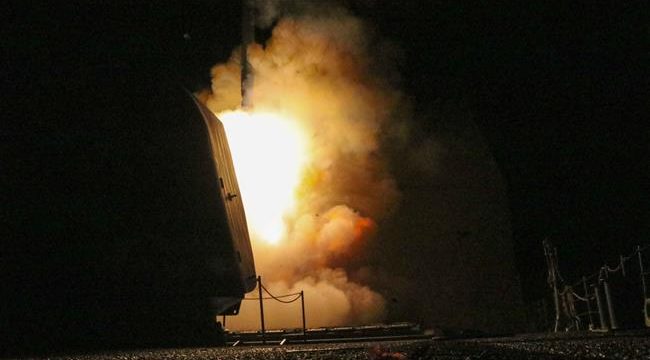 FNA- No Iranian military advisors have been killed in the Sunday night attacks on several military bases in Syria’s Hama and Aleppo provinces, an informed source said on Monday, dismissing the claims made by few Arab media.

“No Iranian advisor has been martyred in the last night missile attacks in Hama and Aleppo provinces,” the source said.

Syrian state media reported overnight that “enemy missiles” had struck government targets in Hama and Aleppo provinces. The reports did not mention any casualties from the missile strikes, or who was suspected of the attack.

The Syrian army positions came under missile attacks in Hama and Aleppo provinces two weeks after the trilateral attacks by the US, the UK and France.

No one has yet admitted the responsiblity for the attack, but militants’ news outlets and social media networks said the US has fired the missiles from Al-Tanf border crossing in Eastern Syria.

Some other sources said that the missile attacks were carried out by the US and in response to the Syrian army’s advances East of Euphrates against the Kurdish-dominated Syrian Democratic Forces (SDF).

Other sources said that Israel that had previously targeted the T4 airbase in Homs province where the Iranian troops had been stationed has been behind the missile attacks.

There is yet no official confirmation on the origin of the missile launches.

Syria’s Tishrin website also reported that nine ballistic missiles were fired from the US and British bases in Northern Jordan at the Syrian army’s military positions in Hama and Aleppo.

The Arabic-language Sputnik also reported that 12 soldiers have been killed and many more wounded during the missile attack on the arms depot of the Syrian army’s Brigade 47 in Hama countryside.

Further reports this morning revealed that more than a dozen civilians who lives in a village adjacent to one of the Hama depot have been killed in the raid.

The US, France and the UK launched a series of strikes on Syria on April 14 in retaliation for the alleged chemical attack by the Syrian government in the town of Douma. The strikes came hours before the Organization for the Prohibition of Chemical Weapons (OPCW) team was scheduled to arrive in Douma to determine whether chemical weapons had indeed been used there.

Russia stated that Moscow had proof that it had been a provocation and had been staged by Western-backed NGOs, including the White Helmets. Syria has also dismissed all accusations, calling the reports merely fake news that is aimed solely at helping terrorists and justifying potential strikes against Syrian government forces.

Syrian officials have over and over again denied the allegations, arguing that the chemical attack was staged by terrorist groups, and the government did not need such measures to curb the militants.

Two Israeli fighter jets struck the T4 military base in Central Syria from the Lebanese airspace on April 8, killing and wounding over a dozen militaries, including seven Iranian military advisers. Israeli F-15 warplanes fired eight guided missiles, but Syrian air defense units shot down five before they could hit the air base. Three of the missiles reached the Western part of the military airport.

The incident came two months after an Israeli F-16 fighter crashed after Syria responded with anti-aircraft fire to Israel’s operation in its territory. Damacus said its military base came under Israeli fire, and it hit multiple aircraft in response.

The Tel Aviv regime has launched sporadic attacks against various targets on Syrian soil over the past few years, in assaults slammed by Damascus as attempts to boost terrorist groups who have been suffering heavy defeats on the battlefield with President Bashar Assad forces.

The Syrian army has also seized Israeli-made arms and military equipment from militants fighting pro-Damascus forces on numerous occasions ever since the war of militancy started in the country. Israel has also admittedly been providing medical treatment to the militants wounded in the Arab country.