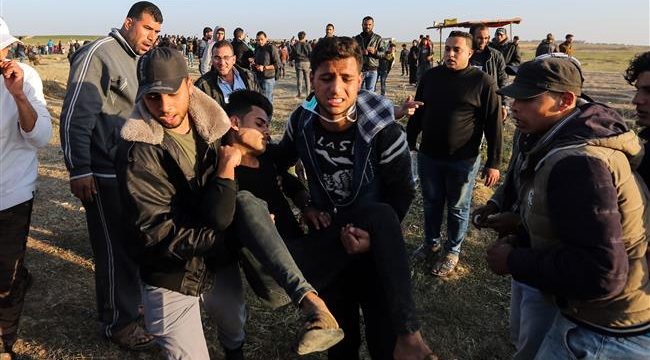 Alwaght– Israeli Regime forces have shot dozens of Palestinians protesting along Gaza borders, many of whom have lost their lower limbs.

According to the Palestinian Health Ministry in besieged Gaza, at least 17 Palestinians have suffered gunshot wounds at the hands of Israeli forces that ultimately cost them their legs during the Great March of Return demonstrations along the border between Gaza and occupied Palestinian territories (Israeli Regime).

At least 45 Palestinians were killed and over 5,600 others injured by the Israeli occupation forces since the start of the Great March of Return peace protests on March 30 at besieged Gaza Strip.

In many cases, Israeli regime rejected the transfer of wounded Gazans to the occupied West Bank, where they could receive medical care that might have saved their limbs.

Washington Post tells the story of three Palestinian youths who lost their legs after being struck by Israeli forces’ bullets.

Mohammad al-Ajouri is a lanky teenager who loves to run, a medal-winning track star with ambitions to compete abroad.

But last month, while participating in Great March of Return rallies, he was struck by a bullet fired by an Israeli force. It penetrated his calf, shattering his leg before exiting the shin. Doctors tried to save the limb, but an infection soon spread. The leg had to be amputated.

The soft-spoken 17-year-old said he was injured at a March 30 protest after he had turned to leave. The bullet tore through his right leg, which was subsequently amputated above the knee.

He still smiles, his eyes crinkling, when he recalls the medals he’d won for the 400-meter dash. “I’m fast, and I love running,” he said from his bed in a sparse room in Jabalya’s refugee camp, as friends and family held vigil.

Alaa al-Daly, 21, was also an aspiring athlete who lost his leg at the hands of Tel Aviv regime’s forces. As a cyclist, he was training for this year’s Asian Games.

On March 30, he participated in a protest near Rafah, in the southern Gaza Strip. Daly said he had cycled to the border with friends, who had assured him that the demonstration would be peaceful. At one point, after gunfire had erupted, he rushed to help another wounded demonstrator. That, he said, was when the bullet ripped through his knee.

“I saw my leg, and my dreams vanished,” Daly said, as he stared at the ceiling of a hospital room in Gaza City. A single bullet had caused devastating damage. “I said to myself: This wasn’t a bullet. This was like a mini-grenade.”

Doctors performed multiple surgeries to repair his blood vessels and restore blood flow to the limb. After five operations, they amputated his right leg.

Youssef al-Kronz, 19, was shot in both legs at the March 30 protest. His left leg was amputated as he awaited Israeli regime’s permission to travel for treatment in the occupied West Bank, and doctors warned he risked losing his remaining leg.

He says he wants to travel to Turkey or Germany to be fitted for a prosthetic leg. Although medical care in the West Bank is better than in Gaza, the cost of a prosthetic limb is beyond the means of his family, and he hopes a foreign country would provide him with one.

At the moment, however, the top worry is his right leg.

“Our main concern now is treating his remaining leg so that he can hold up the rest of his body,” said his father, Iyad al-Kronz, clutching his son’s medical records.

“We cannot afford an artificial limb on our own,” he said. “He needs at least one leg to survive.”

Amputees in Gaza have few rehabilitation options. There are no doctors who can perform surgery to modify amputees’ stumps to accommodate artificial limbs, according to Physicians for Human Rights in Israel.

And at the Artificial Limbs and Polio Center in Gaza City, the only facility in the besieged Gaza that manufactures prostheses, technicians say they face crippling shortages of raw materials. An inadequate power supply also hampers production, leaving many who need limbs without them.

According to rights groups and health experts, the damage to Palestinian protesters’ limbs has been unusually severe. Doctors Without Borders, based in Paris, has recorded “an extreme level of destruction to bones and soft tissue, and large exit wounds that can be the size of a fist.”

Human Rights Watch says it is reviewing evidence that bullets fired by Israeli forces have caused “significant bodily injury,” including “the shattering of bones. . . and severing of veins and arteries.”

The United Nations, also says Tel Aviv is engaged in an “excessive use of force,” and human rights groups point to cases where soldiers have fired at unarmed protesters or at those who didn’t pose an immediate threat.

“The deployment of snipers, careful planning and significant number of injuries to the lower limbs does reflect an apparent policy to target [those] limbs,” said Omar Shakir, Israel-Palestine director at Human Rights Watch in New York. But targeting protesters’ legs “does not make the policy any less illegal,” he said. “The use of live ammunition to any part of the body invariably causes serious injury and even death.”

The Palestinian Great March of Return peaceful protests,” will last until May 15, which coincides with the 70th anniversary of Nakba Day (Day of Catastrophe) on which Israel was created.

Every year on May 15, Palestinians all over the world hold demonstrations to commemorate Nakba Day, which marks the anniversary of the forcible eviction of hundreds of thousands of Palestinians from their homeland by Zionist in 1948.

Since 1948, when the fake Israeli entity was created, it has denied Palestinian refugees the right to return, despite UN resolutions and international law that upholds people’s right to return to their homelands.

These year’s Land Day demonstrations come at a time when Palestinian anger is already high over Trump’s decision in December 2017 to recognize al-Quds (Jerusalem) as Israeli regime capital.