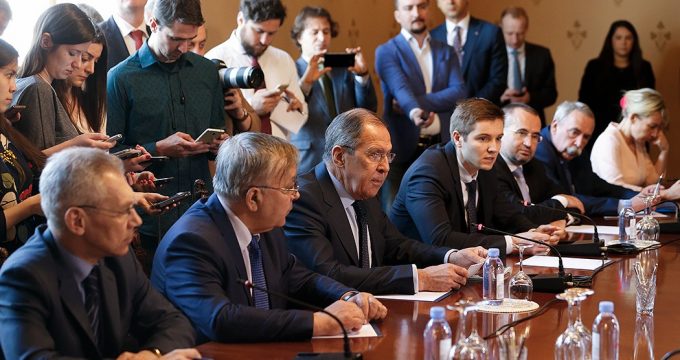 RT– Russia, Iran, and Turkey will resist any attempts to “divide” Syria and undermine a peaceful solution to the crisis, FM Sergey Lavrov said, while casting doubt on the reasons behind the recent UN criticism of the Astana process.

“It’s quite strange when they try to press him into criticizing the Astana peace process and the outcome of the Sochi Congress,”Lavrov said on Saturday. Staffan de Mistura publicly endorsed the talks previously and even attended them in person. This week, however, he claimed that the Astana talks guarantors – Russia, Turkey, and Iran – do not actually reduce tensions in Syria but only “escalate” the situation.

Lavrov met in Moscow with fellow foreign ministers – Turkey’s Mevlut Cavusoglu and Iran’s Mohammad Javad Zarif – to discuss the progress of the Syrian de-escalation effort as well as other issues of regional importance, like the risk of US withdrawal from the nuclear deal with Iran.

The three ministers reiterated their commitment to a peaceful resolution of the seven-year war in Syria, and dismissed criticism from some other nations that the Astana negotiations, which the three nations kick-started, were somehow harmful for the UN-sponsored negotiations in Geneva.

Lavrov stated that the “Astana format is standing strong,” and criticized some Syrian opposition forces for trying to set conditions on their participation in the Geneva talks, including the removal of Syrian President Bashar Assad from power.

“Such approach not only contradicts the spirit and letter of UN Security Council Resolution 2254, but is also definitely aimed at creating obstacles to renewal of the negotiation process,” the Russian foreign minister said.

Zarif said the Astana process was without a doubt the most successful format in terms of curbing violence in Syria, and suggested that critics are simply pursuing their self-interests rather than caring about the Syrian people.