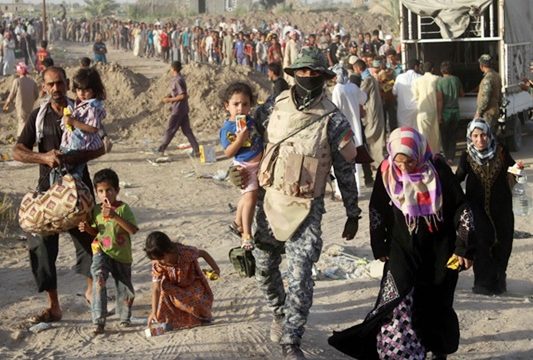 Press TV – April 28 marks the anniversary of the 2003 US attack on protesters in the central Iraqi city of Fallujah. At least 20 people were killed when American forces opened fire on protesters who came out in defiance of a curfew imposed by the US military.

Fifteen years on, the residents of the city still recount the bloody attack, which followed the 2003 invasion of the Arab country.

In the following months, Fallujah also saw two massive US-led operations. US troops used white phosphorus as a weapon in their offensives on the city, located 65 kilometers (40 miles) west of the capital Baghdad. Samples taken from Fallujah and analyzed at certified German labs have also shown traces of uranium, mercury, and other poisonous substances.

The deployment of the chemicals, many believe, explains significant rise in cancer and birth defect rate in the city after the US attacks.

Research, including the epidemiological study “Cancer, Infant Mortality, and Birth Sex-Ratio in Fallujah, Iraq 2005 – 2009” by Busby, Hamdan, and Ariabi, published in the International Journal of Environmental Research and Public Health, has linked the birth defects among Fallujah children to the US bombardments.

Footage shot by AFP on the anniversary of the 2003 massacre showed seven-year-old Fatima Shehab, who was born in the city with her hands and feet severely deformed.

“At first I had a few miscarriages, then I had her,” said the Fatima’s mother. “When she was born we found that she had defects in her extremities, in the hands and feet. The doctors discovered that it was a result of the phosphorus, which was used by the Americans,” she explained.

In 2014, US organizations Center for Constitutional Rights and Iraq Veterans Against the War, which counts veterans who fought in Fallujah among its members, filed a Freedom of Information Act request with the US Department of Defense. They were gathering information about the use of depleted uranium in Iraq to better assess possible consequences for their own health as well as that of Iraqi civilians.

The US-led invasion gave rise to sectarian violence and the emergence of the Takfiri terrorist group of Daesh in 2014.

Fallujah was first to fall to the Takfiris, and riddled with landmines planted by the terror group, which was driven out of late last year.