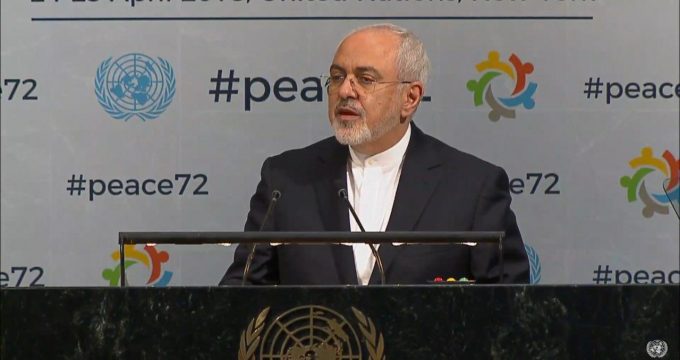 April 25, The Iran Project –Iranian Foreign Minister Mohammad Javad Zarif on the last days of his visit to New York to attend the UN meeting, met top world officials, held several exclusive interviews with foreign media, addressed the gathering and finally finished his six-day visit to the US.

While in New York, he met with UN Secretary General Antonio Guterres, his German counterpart Heiko Mass as well as his Norwegian counterpart Marie Eriksen Soreide.

He also had several exclusive interviews with AP, the National Interest and NPR. Earlier, he had talked to CBS, Al-Monitor and New Yorker.

Addressing the 72nd High-level Meeting on Peace building and Sustaining Peace at United Nations Headquarters in New York on Tuesday (April 24), the Iranian foreign minister said Middle East has been hit by conflicts more than any other regions.

Zarif stressed that prevention of war requires focus on the causes and origins of it, including factors such as occupation, foreign intervention and extremism.

He noted that the time has come to move away from hegemonic illusions which are causing strife in the Middle East adding, “Persian Gulf countries must join forces in order to maintain regional peace instead of trying to become regional powers.”

The top Iranian diplomat had also given a speech at the US Council on Foreign Relations on April 23.

Meanwhile, the Iranian and German FMs discussed the future of the Iran nuclear deal and the necessity of more efforts and commitment on the part of European countries to preserve it.

Among other key topics on the agenda were upcoming trips to the US by European leaders and their attempts to maintain the nuclear agreement as well as the need for them to make all parties to the deal fully live up to their obligations under the Joint Comprehensive Plan of Action (JCPOA).

The two top diplomats also exchanged views on the situation in Syria and emphasized the need to make efforts to restore stability to the Arab country through political talks.

In a meeting with Zarif, the UN chief expressed his support for efforts to preserve the JCPOA – known as the Joint Comprehensive Plan of Action – while stressing the need for all signatories to the deal to make good on their obligations under the agreement.

Also on the agenda of the talks were the developments in the Middle East, especially the situation of Syria and Yemen, and the UN’s role in helping restore peace and stability to the region through political dialogue.

In a meantime, the Iranian and Norwegian FMs discussed the need for the US and the EU to stay committed to JCPOA and also Europe’s attempts to preserve the deal.

Iranian and Norwegian ministers also underlined the importance of all countries cooperation to find a political solution for regional crises, especially in Syria and Yemen.

Bilateral ties and boosting economic and investment cooperation between Iran and Norway were among other topics discussed by both sides.

Talking to AP, Zarif said a US withdrawal from the landmark 2015 accord would undermine Trump’s talks with North Korea by proving that America reneges on its promises. He said if Trump re-imposes sanctions, “basically killing the deal,” Iran would no longer be bound by the pact’s international obligations, freeing it up to resume enrichment far beyond the deal’s strict limits.

Talking to the National Interest, he said it’s not possible for anybody to become a hegemon anywhere. So hegemonic tendencies are delusional in today’s world; even governments in general have lost a monopoly over the use of force, we have nonstate actors emerging.

In an interview airing Tuesday on Morning Edition of NPR, Zarif reiterated he hopes that French President Emmanuel Macron and German Chancellor Angela Merkel, during their successive visits to the United States this week, will “impress upon President Trump” that the international community “will be much better served if they were to respect the terms of the deal.”

Eventually, Zarif left New York for Tehran at the end of his 6-day working trip on Wednesday (April 25).