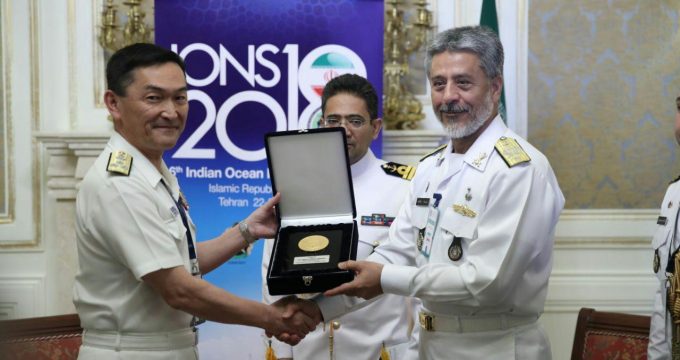 Sayyari made the remarks Tuesday in a meeting with Japanese Maritime Self-Defense Force Rear Admiral Hiroshi Yamamura which was held on the sidelines of the 6th Indian Ocean Naval Symposium (IONS 2018) underway in Tehran.

Japan has a very sensitive position in Eastern Asia, Sayyari said while expressing willingness to have cooperation with Japan at a different level.

The cooperation will be established without interference of foreigners.

Referring to Iran’s strategic position, he said, ‘We have always been after taking advantage of different capacities to develop.’

‘Both countries can increase the level of cooperation in the technological field,’ he said.

Yamamura, for his part, expressed the hope for boosting military ties between the two countries.

He also emphasized developing interactions in fighting piracy in Gulf of Aden.

The 6th Indian Ocean Naval Symposium (IONS 2018) started with the attendance of the 35 high-profile military delegations in Tehran on Monday.