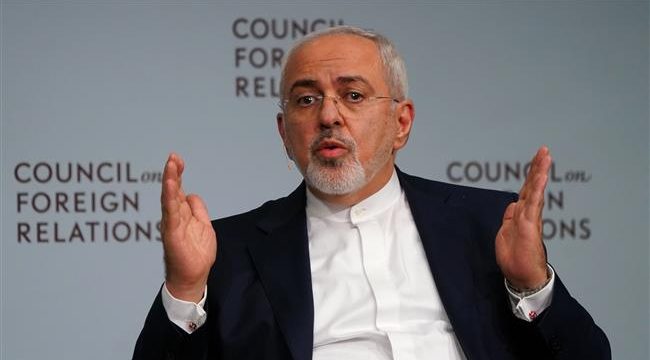 April 24, The Iran Project – Iranian Foreign Minister Mohammad Javad Zarif in continuation of his visit to New York to attend the High-Level Meeting on Peace-building and Sustaining Peace, held exclusive interviews with two American media including Al-Monitor and New Yorker.

He also met with his Belgian counterpart Didier Reynders and addressed the Council on Foreign Relations in New York.

Moreover, the top Iranian diplomat made an interview with reporters at an Iranian official residence.

During an interview with the al-monitor television network, Zarif said the Trump administration was never in the JCPOA (Joint Comprehensive Plan of Action). They made sure over the last 15 months that Iran would not benefit from the economic dividends of the JCPOA, and so whatever they do in three weeks would not be a major break from the past.

In a meantime, Zarif told New Yorker that he has called on the US to comply with Iran nuclear deal.

“The only scenario that we can deal with is for the Europeans to talk to the Trump Administration to start, once and for all, complying with the deal,” Zarif added.

During a meeting, Zarif and Reynders underlined the significance of expanding bilateral ties, particularly in making further investments in Iran. They urged all involved sides in the Iran nuclear deal to remain committed to their pledges under the accord.

The situations in Syria and Yemen were also discussed during the talks between the Iranian and Belgian top diplomats. They both called for a political solution to the crisis in Syria and called for international cooperation for restoring peace and truce to the war-torn Yemen.

Addressing the Council on Foreign Relations, Zarif highlighted that the era of zero-sum games is long gone and stated: ”In the wars of 20th and 21st centuries, there are no winners; only the degree and amount of loss will be different. In the globalized era…. you cannot have security at the expense of insecurity of others,” he said, adding, “The era of hegemonic influence is long gone.”

He noted that Saudi Arabia is trying to introduce Iran as a regional threat, while stressing that more dialogue is needed among regional states.

Iranian foreign minister said Iran believes the region is suffering from “a dialogue deficit” and that’s why it has suggested creating “a regional dialogue forum.”

In an interview with reporters at an Iranian official residence overlooking New York’s Central Park, Zarif asserted that the Trump administration had the “option to kill the deal, but they have to face the consequences … We will make our decision based on our national security interest when the time comes, but whatever it is it will not be very pleasant for the United States, I can say that.”

US President Donald Trump has been a vociferous critic of the Iran nuclear pact, which was negotiated under his predecessor, Barack Obama. He has called the agreement the “worst deal ever” and even threatened to tear it up.

Besides, Zarif also tweeted that French President Macron is right when he said there is no plan B for the nuclear agreement of July 14, 2015.

Zarif posted a message on his Twitter account highlighting the point made by Macron, who told Fox News in an interview ahead of his state visit to Washington, that there is no alternative for the JCPOA.

The event is to be held on April 24-25 in the United Nations General Assembly (UNGA) and Zarif is to deliver a speech on April 24.