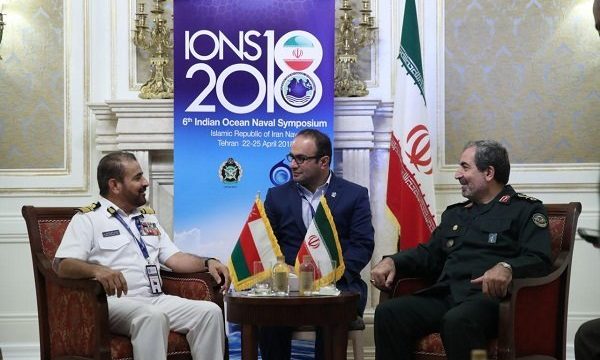 MNA – Iran and Oman have historical relations and play regional and global roles in the Strait of Hormuz, according to the Head of International Affairs Department of the General Staff of the Armed Forces Bregadier General Ghadir Nezamipour.

Head of International Affairs Department of the General Staff of the Armed Forces Bregadier General Ghadir Nezamipour made the remarks in a meeting with the Commander of the Royal Navy of Oman Abdillah Al-Raisi in Tehran on the sidelines of the 6th Indian Ocean Naval Symposium (IONS) on Tuesday morning.

In the meeting, Bregadier General Nezamipour expressed his happiness with his meeting with Commander of the Royal Navy of Oman, praising the important roles that the two countries play in the region.

He stressed that the two countries exercise regional and global responsibilities in the Strait of Hormuz.

The Iranian military official hailed the leaders of Iran and Oman’s emphasis on expanding relations, expressing hope that the bilateral relations would further expand.

He also hoped that Iran and Oman will increase their joint military drills annually with the participation of more neighboring countries.

Rear Admiral Abdillah Al-Raisi, for his part, expressed his gratitude to the Islamic Republic of Iran for hosting the IONS, hailing deep historical relations between Iran and Oman.

Oman Navy chief expected positive outcomes from the joint commission meeting next week, expressing his hope that the bilateral relations will increase dramatically.

He added Sultan Qaboos stressed expanding bilateral relations between the two countries, adding a lot of efforts have been done so far in that regard.

Referring to the current disputes between Saudi Arabia and Qatar, Al-Raisi stressed that Oman believed regional countries must avoid disputes and try to solve their problems through dialogue.

Abdillah Al-Raisi, Ghadir Nezamipour, Indian Ocean Naval Symposium (IONS), Iran-Oman ties, Strait of Hormuz April 24, 2018
Macron will have to ‘pull a rabbit out of the hat’ to save Iran deal
IT, Telecoms exhibition opens on Iran’s Kish Island