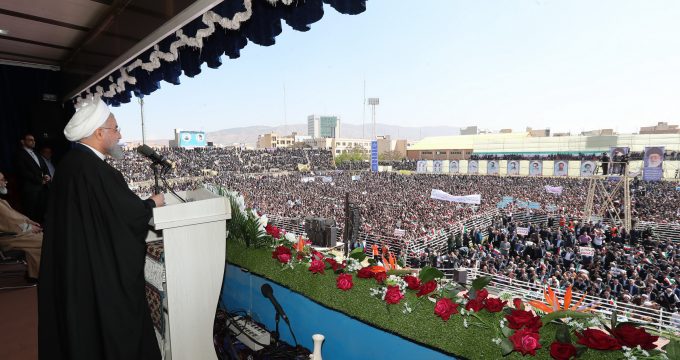 president.ir- Dr Rouhani stressed that the people and government of Iran will continue making progress along the path of development of the country, and added: “Nobody can make this nation hopeless and take away its hope to the future and the White House must know that whether it remains faithful to its commitments or not, the great Iranian nation will powerfully confront any kind conspiracy and plots”.

Speaking before the large gathering of people in Tabriz on Tuesday, President Hassan Rouhani said: “Based on what we have promised people, we will protect calmness of people and the market and I promise the great people of Iran that the conspiracies of the United States, Zionists and the Arab reactionaries in the region will not have any effect on our dear Iran’s advancement”.

He also referred to his promises during his presidential campaign last year, and said: “We promised security, peace, freedom, progress, reviving Lake Urmia and Azeri language, and supporting sport, especially Tractor Sazi team, and we keep our promise”.

He also went on to say: “Due to the efforts and bravery of the Islamic Revolutionary Guard Corps (IRGC), our Army, Police and Basij’s we enjoy model security,” adding that integrity and unity are bases the country’s security.

He continued: “Azerbaijan is the land of distinguished ulama and figures, revolutionaries and great martyrs of our Islamic Iran”.

Iran’s non-oil export has increased 15% and import has increased 7% compared to last year, the President said, adding: “The government is committed to resolving any problems on the path of the country’s development”.

He also thanked all pillars of the country, the Judicial Branch and security forces for supporting the government’s decisions.

“Today, 3 trillion tomans worth of projects will be opened in the province,” he added, saying: “I ordered the major copper project to restart activity after closure”.

Stating that “The first liver transplant was performed today in Tabriz,” the President continued: “I appreciate the people of Azerbaijan province for their literature, self-sacrifice spirit and efforts”.

He also went on to say: “Approximately 2.2 trillion tomans were spent for restoration of Lake Urmia, and we will also spend another 1 trillion tomans”.

“By the end of the 12th Government, water level of Lake Urmia will increase by one meter”, added Rouhani, saying: “On last trip 23 projects were ordered to be started, out of which 18 projects have been finalised by now and the rest will be completed soon”.

“Miyaneh-Tabriz Railway is one of the promises of the government and it will reach Bostan Abad this year,” he continued, adding that despite all hardships, the government will keep its promises.

Stating that “A special committee for managing water supply has been formed in the government,” the President of the Islamic Republic of Iran added: “In this visit, 1.18 trillion tomans will be allocated to new projects in the province”.

Dr Rouhani also said: “People can be sure about country’s security, peace, freedom and progress,” continuing that “Supporting domestic production is everybody’s duty and responsibility”.