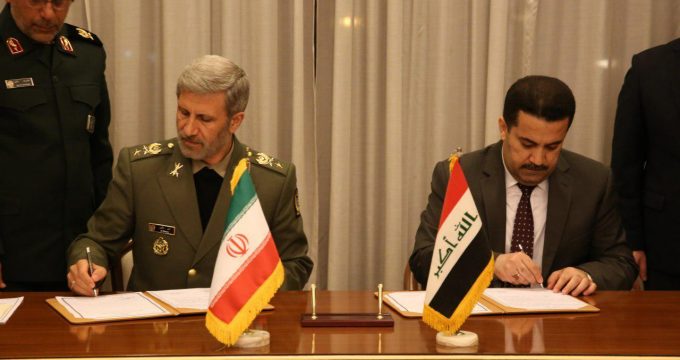 He also attended the quadrilateral military intelligence committee of Iran, Russia, Syria, and Iraq which was held in Baghdad on Thursday (April 19).

Brigadier General Amir Hatami and Iraqi Minister of Industry and Minerals Mohammed Shyaa al-Sudani also signed a draft Memorandum of Understanding on industrial areas between the two countries of Iran and Iraq.

Speaking at the presser following the signing ceremony, Iranian minister expressed content with the signed agreement, adding that only, the solutions prescribed inside the region are to solve the regional problems.

He asserted that Iran is determined to develop bilateral ties with Iraq.

“The interests of the two brotherly and friendly countries of the Islamic Republic of Iran and the Republic of Iraq are in developing bilateral relations,” said al-Sudani for his part.

During the meeting with al-Ghanmi, General Hatami extended greetings on Iraqi’s victory over terrorist groups and voiced Iran’s strong support for Iraqi nation and government.

Pointing to the capabilities and capacities of Iranian Ministry of Defense and Armed Forces Logistical Support, the Iranian official voiced his ministry’s readiness to develop bilateral cooperation in intended areas.

Al-Ghanmi, in turn, referred to extensive cooperation between Iran and Iraq in the war against terrorism to clear Iraq from the terrorists and voiced gratitude for Iran’s bold and brotherly role in the anti-terror campaign.

The Iraqi minister, for his part, voiced hope that as Iran has been very supportive of Iraq in the time to fight against terrorism, to be strongly in support of Iraqis in the time of re-constructing Iraq.

Talking to Fayyad, General Hatami said that he is proud of the fact that Iran stood beside Iraq in war against the ISIL.

Talking to al-Mohandis, Iranian minister said, ” I am totally assured that you have endured many pains and toils to be able to restore security and stability to Iraq and because of this I am grateful of all of you.”

Al-Mohandis, in turn, welcomed the official of the Islamic Republic of Iran and offered gratitude to all supports offered by the Iranian ministry of defense and armed forces logistical support in the war against terrorism.

In a meantime, Iraq’s Director of Military Intelligence Major General Saad Mezher Al-Alaq, addressed the meeting and welcomed the Iranian minister for visiting Iraq and the activities of the committee in the time of war against the ISIL and terrorism.