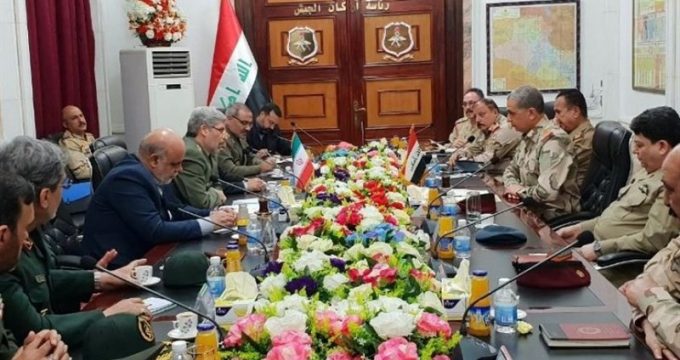 Tasnim – The defense ministers of Iran and Iraq weighed plans for closer military interaction between the two Muslim neighbors in a meeting of a high commission on defense cooperation.

In the meeting, the Iranian minister praised Iraq’s victory over the Daesh (ISIL) terrorist group, assuring the Arab country of Iran’s continued support in the war against terrorism.

He also voiced Tehran’s willingness for constant defense and military cooperation with Baghdad at the highest level.

For his part, the Iraqi general expressed gratitude to Iran for its unwavering support for the Arab country in the battle against Takfiri terrorists, hoping that the cooperation would continue in the process of reconstruction of Iraq.

Heading a high-ranking delegation, Brigadier General Hatami arrived in Baghdad on Wednesday for talks on defense ties with the Arab country.

In July 2017, defense ministries of the two countries signed an agreement to promote interaction and share experiences in the fight against terrorism and extremism, work together to ensure border security, and provide each other with training and logistical, technical and military support.