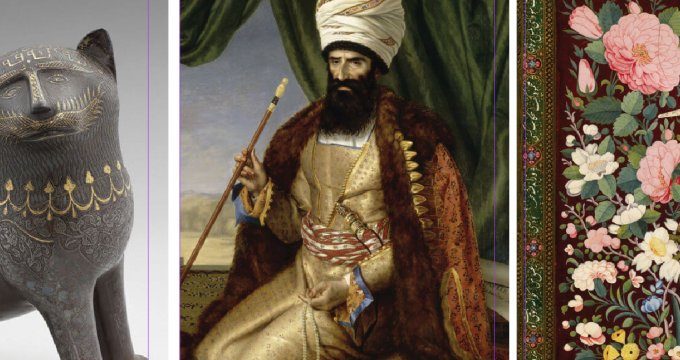 Financial Tribune- A total of 19 relics of Qajar era (1786-1925), part of treasured collection of Golestan Palace in Tehran, are currently on show at Louvre-Lens, an art museum in Lens, northern France, as contribution to a large exhibition of 19th century Iranian art.

The artifacts include eight oil paintings and watercolors, an album of photos taken by Qajar king Nasser al-Din Shah (1831-1896), a copper crown that once belonged to the founder of the Qajar dynasty Aqa Mohammad Khan (1742-1797), two fine manuscripts of the Qur’an and six muraqqas (albums in book form containing calligraphies and miniature paintings), Onlineartgallery.ir reported.

Titled ‘Empire of Roses: Masterpieces of 19th Century Art’, the exhibit will run through July 23. It is the first retrospective in Europe dedicated to the lavish art of the Qajar dynasty.

The main significance of Qajar art is that it opens up to modernity while seeking to preserve its identity, says the statement of the exhibit published on the website of the museum Louvrelens.fr.

Original and surprising, the artistic creations of Qajar period are particularly rich and abundant, stimulated by an extremely excellent court production. This is what the exhibition highlights through more than 400 works belonging to private collections and prestigious European, North American and Middle East institutions.

Few art historians have looked into the 18th and 19th centuries of Iran. Such studies by specialists of Islamic art are still recent. Qajar era is a pivotal period, now considered a major reference for contemporary Iranian artists.

In 1786, Aqa Mohammad, an army general, manages to seize power and settles in the small town of Tehran which he makes his capital. After assassination of Aqa Mohammad Khan in 1797, his nephew Fat’h Ali Shah ascends the throne. Six rulers succeed each other until Ahmad Shah is deposed in 1925 by Reza Khan, who founded the Pahlavi dynasty.

During this period, court artistic production showcases traditional techniques in painting, glassware and metalwork, and brings them to a high degree of excellence. Qajar rulers themselves practiced drawing and calligraphy.

At the same time, new techniques were emerging, including photography, which has played a significant role since its introduction in the 1840s. While major iconographic themes were preserved, artistic styles underwent profound change.

Passionate about art history, Lacroix imagined the scenography of the exhibition as a stroll through the rooms of an opulent Qajar palace.

Visitors are welcomed by a splendid stage created by Lacroix in 2001 for Bianca Li’s Shéhérazade ballet at the Opéra National de Paris.

Inside the exhibition gallery, the succession of rooms is inspired by the pleasure castle of Souleymanieh, built by Fat’h Ali Shah.

One section presents a cultural panorama of Qajar period. Visitors will pass through a gallery flanked by portraits of rulers. Then they are invited to look at the close ties that the dynasty maintained, from the beginning of the century, with its European counterparts.

Another section deals with court art and its codification according to an aesthetic peculiar to the dynasty. The kings had artistic tastes. Using their image cleverly, they created new settings for power which was sometimes under dispute.

The last section discusses artists, evolution of their status during the century, and their encounter with modernity. It brings to light the main themes in painting, ceramics and metalwork. Artists’ quest for excellence in traditional techniques or an Iranian version of modernity responded to the demands of the shahs who were fascinated by European innovations such as photography or lithography, which revolutionized Iranian art. Outstanding works, including a huge crystal candlestick, punctuate this section.

Empire of Roses was made possible thanks to the support by the cooperative bank of Crédit Mutuel Nord Europe Foundation and the philanthropic Total Foundation based in Belgium, in partnership with Sanef group from the Spanish conglomerate corporation of Abertis, and French house builder Maison Lelièvre, for furniture silks.

The exhibition and its accompanying conference are also supported by the president of the US-based private foundation of Roshan Cultural Heritage Institute Elahé Omidyar Mir-Djalali.