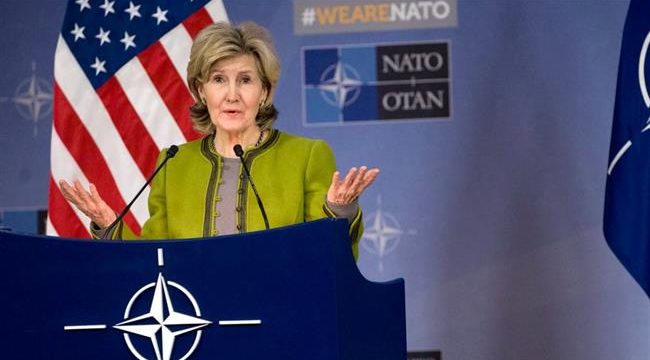 US envoy to NATO accuses Assad of ‘genocide’, calls for military strike

Press TV- The US ambassador to NATO, Kay Hutchison, has accused Syrian President Bashar al-Assad of “genocide” in the aftermath of a suspected chemical attack in the Damascus suburb of Douma, calling for “a military response.”

In an interview with Sky News, Hutchison urged US allies like Britain to join with Washington in a “concerted and joint effort” against the Syrian government.

The NATO ambassador said she believed a military strike should take out Syrian bases “from which they are flying to drop chemical weapons.”

PressTV-‘US jets flying over Syria’ amid threat of imminent strike

Reports suggest American jets are patrolling the skies above Syria as the threat of military action over an alleged chemical attack looms large.

The call for action came after President Donald Trump and British Prime Minister Theresa May agreed to work together to hold the Assad government accountable.

The Western governments blamed the incident in Douma on the Syrian government. Damascus rejected the accusations as “chemical fabrications,” made up by the terrorists in a bid to halt army advances in the region.

Russian officials have also denied that the Syrian government used chemical weapons, saying militants in the area are seeking to frame Damascus.

On Tuesday, Russia vetoed a US resolution at the UN Security Council to create a new inquiry to determine who was responsible for the attack.

A rival measure put forward by Russia — which called for a probe requiring the Security Council to attribute responsibility — also failed to garner enough votes for adoption.

Meanwhile, President Trump huddled with his national security advisers and military leaders to weigh a possible military response to Syria.

White House officials and Trump advisers argued that an operation of the same scale would not be effective at impeding the Syrian military.

The discussions came a day after Trump vowed to make a decision on a response within the next 24 to 48 hours.

US officials were confident that they would have the backing of France, Britain, Saudi Arabia and Qatar for a military strike. But it was not clear if any of them would take part in a military operation.

At the same time, Russia warned that it would respond to any “illegal action” in Syria.