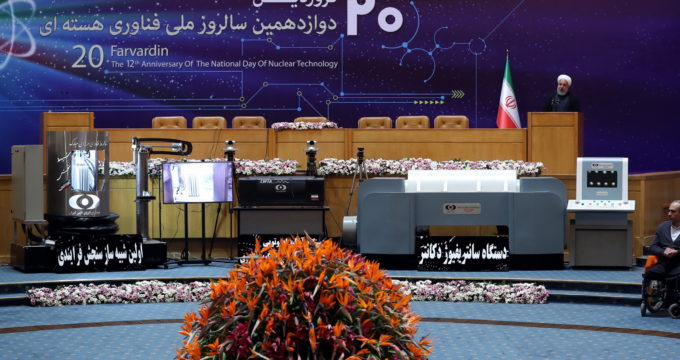 We need diplomacy power alongside scientific, technological power to promote our people’s rights

president.ir- Emphasising that Iran will continue along the path of achieving scientific technology, President said: “The clear message of nuclear achievements is faster and more accurate spin in the nuclear technology in the 11th and 12th Government”.

Speaking in a ceremony marking the 12th anniversary of national day of nuclear technology on Monday, Dr Hassan Rouhani said: “Our nuclear martyrs sacrificed their lives for national pride and we appreciate all those who have taken steps in the developments of our nuclear technology in different governments and periods”.

“Our nuclear martyrs sacrificed their lives for national pride,” said Rouhani adding that national day of nuclear technology is a happy day for our people and scientists.

He went on to say: “Living, economy and business will become knowledge-based. 3,000 knowledge-based companies working in recent years is a valuable move in increasing our country’s capabilities”.

The President continued: “Everybody must pay attention to the fact that achieving our favourable authority is legitimate power and fruitful for our society”.

“The Iranian nation has the required technical and legal logic for negotiation with powers and promoting its rights,” he added.

“Diplomacy removes the barriers, accelerates the process and decreases the expenses,” added Dr Rouhani, saying: “We have not -and will not- abandon our national technology”.

He went on to say: “We will not ask for permission four our brave, scientist young people’s research but we are ready for constructive interaction”.

“After the Joint Comprehensive Plan of Action (JCPOA), we have had over 120 great nuclear achievements,” added the President.

Dr Rouhani added: “We need military and defence power, economic power and cultural power simultaneously for legitimate authority in the region and the world”.

Stating that “we stood on our feet in hard days, and we know that the enemies are not happy with our progress”, he continued: “We have never looked for the satisfaction of our enemies; first, we want satisfaction from God and our people”.

The President also went on to say: “Over the past few years, we have defeated the enemies in their goal of using terrorist as a tool against the region”.

“Along with the power of science and technology, we need the power of diplomacy to promote the rights of our nation,” he added.

Dr Rouhani continued: “We cooperate with Russia, China and European countries in the field of nuclear research and development”.

He also went on to say: “After the Joint Comprehensive Plan of Action (JCPOA), we started to do business with the world in nuclear materials”.

“Contrary to what the enemies wanted, we will continue to overcome the difficulties; we have a great nation that relies on God,” continued the President of the Islamic Republic of Iran.

Emphasising that “we proved to the world that we live up to our commitments”, he continued: “Many tried to make us destroy the JCPOA with our own hands, but they failed against our nation’s intelligence”.

“In the end, it is YOU who must pay the price of killing the JCPOA, not the Iranian nation,” added the President, saying: “They have spent billions of dollars to bring down the JCPOA building, but it still remains to this day”.

Dr Rouhani continued: “Whether JCPOA stands or not, with the US or without it, we are ready for any situation and have plans for it”.

Stating that “if they hurt the JCPOA one day, they will lose their reputation in the world”, he added: “The Iranian nation cannot be derailed from independence, freedom and the causes of the Revolution with propaganda”.

The President continued: “If they break their promise, they will definitely regret it and they will face the consequences in under a week”.

He continued: “Our weapons are defensive and the guarantor of peace in the region,” adding: “We will develop any weapon to defend our nation”.

“The base of our relations with neighbours is development of peace and friendly cooperation; those who say incorrect words and the newcomers in the region will understand this,” he added.