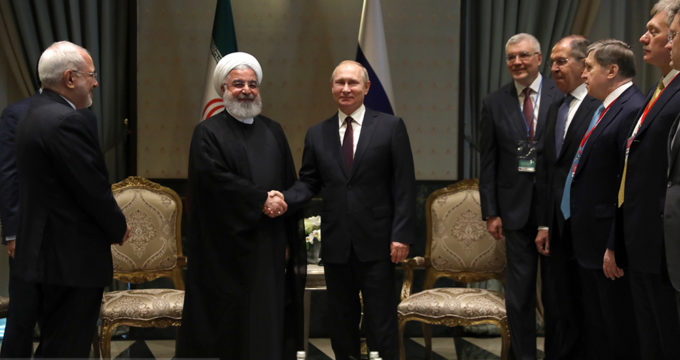 “We have permanent, regular dialogue at practically all levels in all areas of our cooperation. At the political level, we have permanent contacts with you personally. When I was in Iran, I met with your country’s spiritual leader. Our foreign ministers are working all the time, and our military officials keep in touch with each other too,” Putin said in his opening remarks at his meeting with Rouhani.

“We are working together to resolve the most difficult pressing issues of today, including the Syrian problem. I am very glad to have another meeting with you, since this gives an opportunity to talk about bilateral contacts, discuss what we should do to develop our relations and talk about the international situation, above all, in the region, of course,” the Russian president pointed out.

For his part, Rouhani noted that he is glad to have an opportunity to meet with his Russian counterpart. “The two countries see eye-to-eye on bilateral and international issues. As for regional issues, we have very good interaction, especially with regard to the Syrian settlement. The summit, which you held in Sochi at your own initiative, was a starting point for resolving the Syrian crisis. After that summit, you held the Syrian National Dialogue Congress in Sochi, which was quite successful. And today I am very glad that the second round of the trilateral summit is being held in Ankara,” he said.

“We have three important objectives: security and stability, return of refugees and determining the fate of the Syrian Arab Republic by the Syrians. I do hope that today’s summit will contribute to efforts to achieve peace and security in our region,” the Iranian president said.