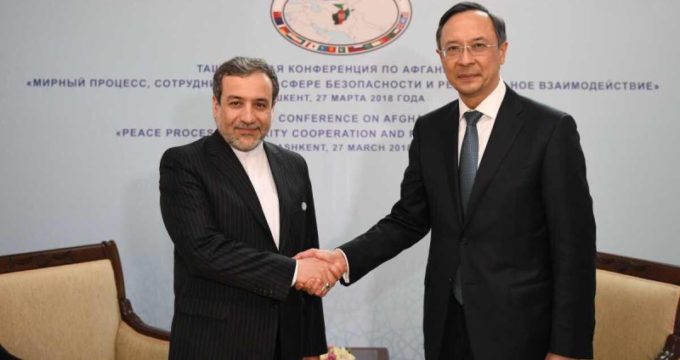 Abdrakhmanov made the remarks in a Thursday’s meeting with Iranian Deputy Foreign Minister for Political Affairs Abbas Araqchi held on the sidelines of Afghanistan’s peace conference in Uzbekistan.

Both countries have good economic projects on the agenda, he said.

He also referred to regional and international cooperation between Iran and Kazakhstan as regard maintaining peace and security in Syria.

Elsewhere in his remarks, Abdrakhmanov supported Iran nuclear deal also known as Joint Comprehensive Plan of Action (JCPOA) and emphasized the importance of complying with the accord by all sides.

Araqchi, for his part, praised Kazakhstan’s stance regarding JCPOA and its cooperation to establish peace and stability in the region.

He called for bilateral cooperation with Kazakhstan in regional and international issues.

The Afghanistan’s peace conference opened on Monday, and foreign ministers or their deputies from 23 countries, as well as representatives of the United Nations, US, European Union, India and Pakistan attended the conference, according to Shah Hussain Mortazavi, a spokesperson for the Afghan president.

The previous peace conference for Afghanistan was held in February 2017 in Kabul, attended by representatives of more than 20 countries and international organizations.