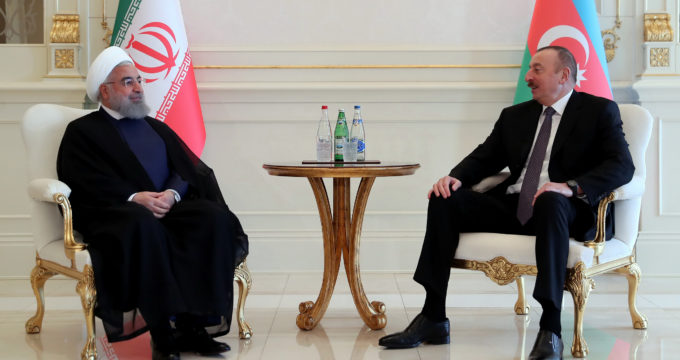 IRNA – Iran’s President Hassan Rouhani said that having free trade between his country and the Republic of Azerbaijan is a step toward enhancing bilateral economic ties.

President Rouhani who was speaking at the joint meeting of high-ranking delegations from Iran and Azerbaijan in Baku, said that the North-South transit corridor on which the two countries are working through implementing Rasht-Astara railway project is a much cheaper, more convenient and shorter path for the two countries, the other states of the region and even for Asia, Europe and Africa.

‘This shows that our cooperation is in the interests of the region and the world,’ he said.

Rouhani arrived in Baku on Wednesday upon an official invitation from his Azerbaijani counterpart Ilham Aliyev.

Referring to the joint projects some of which were to be inaugurated on Thursday, he said that commissioning of the projects, implemented through joint investment and efforts, shows that the two countries are determined to take longer strides for bilateral and multilateral development.

As to free trade between Iran and Azerbaijan, President Rouhani said that in the first phase, the plan can be launched with preferential tariffs for some items.

He also called for more banking relations between the two countries, saying that banking ties is the key to all-out development.

Rouhani said, ‘Our new cooperation on Caspian Sea means that we should make the best use of the divine blessings.’

Echoing his Iranian counterpart, Aliyev said that following the agreements signed on Wednesday, the horizon of the two countries’ relations will become brighter, and the two sides will witness a significant strength in bilateral ties.

Eight agreements were signed by Iran and Azerbaijan on Wednesday, including an important deal on oil and gas in the Caspian Sea.

Opening a joint automaking factory, inauguration of Astara railway project and a local electric power facility are among other programs in President Rouhani’s itinerary.