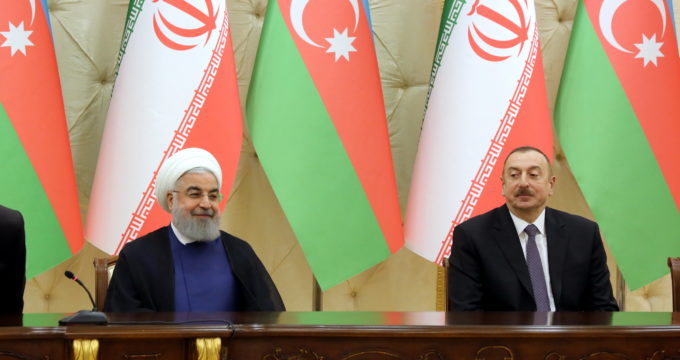 Azerbaijan stands by Iran in all int’l issues:President Aliyev

IRNA – Azeri President Ilham Aliyev said on Wednesday that Azerbaijan Republic stands by Iran in all international issues and both countries support each other at international level.

Signing of the documents not only would serve to expand bilateral relations but will also help regional cooperation, the Azeri president said.

He said the Iranian president’s visit to Baku and the documents inked by the two sides were of importance for the interests of both countries and the region.

Among the eight documents signed today, two documents concerning Tehran-Baku joint cooperation in the field of energy in the Caspian Sea and construction of Rasht-Astara railway were important historically, Aliyev said.

Calling Tehran-Baku cooperation within the framework of regional interactions very effective, the Azeri president said two tripartite summits of the Iranian, Azeri and Russian presidents in Baku and Tehran as well as trilateral meetings of the foreign ministers of Iran, Azerbaijan and Turkey and foreign ministerial meetings of Iran, Georgia, Turkey and Azerbaijan indicate the regional role of both countries.

President Rouhani said at the joint press conference that Iran and Azerbaijan share common viewpoints on regional issues, adding that both states believe that problems in the countries of the region should be settled through political means.

Iran believes Karabakh problems also should be settled by political way and by efforts of both countries of Armenia and Azerbaijan Republic.

He said that Iran is pleased that good political efforts are being made in direction of solving Karabakh problem.

Iran believes that territorial integrity of states and regional geography should not be changed and international principles should be a tool for solving problems.

He stressed that close relations between the two governments, nations in direction of mutual benefits is Iran’s desire.