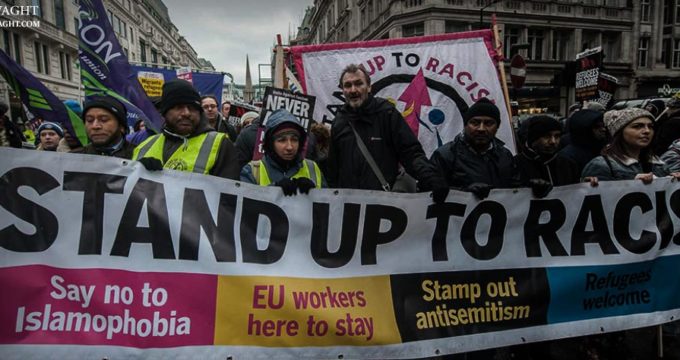 Protest held in London to condemn racism across Europe

Alwaght– Thousands of people have held a protest in London to unite against the “evil of racism” and the growth of far-right movements.

Protesters gathered near Oxford Circus on Saturday, amid freezing temperatures, for the Stand Up To Racism march to oppose growing racism, Islamophobia and other forms of discrimination.

Crowds marched to Whitehall as they held banners, reading “Migrants and refugees are welcome here” and “Stop racist attacks”.

Addressing crowds gathered in London, Labour MP David Lammy said: “We are standing up for the Britain that we love and that we believe in.”

“We are sending a message to the arch chief of this tide of prejudice that is sweeping our world – Donald Trump.”

In another message on Twitter, the Tottenham MP added: “We will not be cowed. We will fight, fight and fight again for what we believe in.”

Demonstrations took place in cities including London, Glasgow and Cardiff ahead of the UN’s Elimination of Racial Discrimination day on March 21.

Using the hashtag #MarchAgainstRacism, demonstrators shared their images of large crowds as they descended on the cities.

Organisers of the event, campaign group Stand Up to Racism, said one reason demonstrators were taking to the streets was to protest against a “massive rise” in racism in Britain and across the rest of the world.

In a statement on its website ahead of the events, it said: “Rampant institutional racism is being felt through a spate of deaths in police custody, the tragedy at Grenfell and systematic discrimination in employment and Hosuing.

“Trump’s Muslim ban, his racist ‘wall’ project and equivocation over white supremacist and fascist marches have led to a climate of racism and fear across the US.”

It added: “If we are to defeat the rise of racism, we need a united movement of everyone who opposes it. The #MarchAgainstRacism is a chance to bring that movement together and show that we will not be silent.”

The march comes less than a month after Mark Rowley, who recently retired as the Metropolitan Police’s counterterrorism chief, warned that the far right poses an “organized and significant” threat to the country, as he revealed that four far-right “terrorist” plots had been foiled since the beginning of the year.

When asked if the government is doing enough to tackle the rise of far-right violence, Khoudari responded at the time: “No because a lot of far-right politicians are now in government. They won’t clamp down because capitalism and the far-right go hand in hand.”

According to Hope not Hate, Britain should brace itself for more far-right violence, claiming that 28 people were arrested or convicted for far-right inspired “terrorist” offences in 2017.

These include Darren Osborne, a white Briton who was sentenced to at least 43 years in prison after killing one person and injuring 12 as he drove a van into a crowd of Muslim worshippers outside a mosque in Finsbury Park in June.

A year earlier, in 2016, far-right gunman Thomas Alexander Mair killed Jo Cox, a Labour MP. Mair said he saw Cox, who was anti-Brexit, as a “traitor to white people”.

According to a UN report, “divisive, anti-immigrant and xenophobic rhetoric” during theEU referendum campaign triggered a surge in hate crimes following Britain’s June 2016 vote to quit the bloc.

The year between 2016 and 2017 saw the largest percentage increase in hate crimes since 2011 to 2012, with the number of reported offences rising to 80,393. The majority of those offences – 78 percent – were racially motivated.