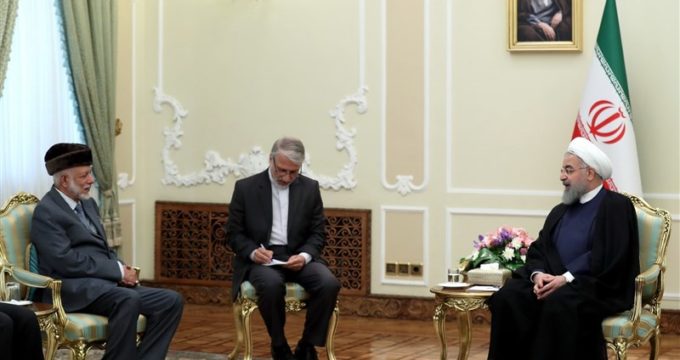 Tasnim – Iranian President Hassan Rouhani voiced concern about the humanitarian situation in Yemen, hoping that interaction between Iran and Oman would help relieve the pains of Yemeni people who are suffering from three years of Saudi-led military attacks.

In a meeting with Oman’s foreign minister in Tehran on Sunday, Rouhani described the humanitarian situation in Yemen as “very critical and worrying”, stressing the need for the delivery of foodstuff and medication to Yemen and for efforts to end the massacre of the people.

The president also hoped that mutual cooperation between Iran and Oman would help the Yemeni people and lead to the establishment of peace and calm in the Arab country.

Iran and Oman bear heavy responsibilities when it comes to regional developments and should use their experiences to promote regional peace and stability, Rouhani added.

He further pointed to the grounds for closer Tehran-Muscat trade ties, urging initiatives to encourage the two countries’ economic activists and entrepreneurs to work on joint projects.

For his part, Oman’s Foreign Minster Yusuf bin Alawi bin Abdullah said the conflicts in Yemen have only brought about trouble and turmoil in the region, stressing the need for joint efforts to end the killing of Yemenis and provide them with humanitarian aid.

He also called for plans to facilitate banking ties between Tehran and Muscat, saying the two sides could begin direct trade ties using their national currencies.

Calling for closer cooperation in the energy industry, bin Alawi said the sultanate of Oman is trying to expand trade and cultural relations with Iran.

Bin Alawi arrived in Tehran on Friday for a visit that focuses on stronger economic cooperation.