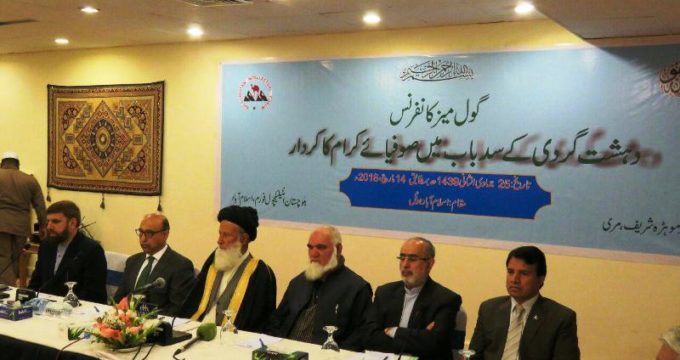 IRNA – Cultural Counsellor of Iran Embassy in Pakistan Shahaboddin Daraei says Islam is a religion of peace and brotherhood, stressing the need for promotion of peaceful image of Islam in the world.

Speaking at a round table discussion on ‘role of mystics in countering terrorism’ here, he said we can solve our problems by following the path of true Islam.

The round table was jointly organized by Balochistan Intellectual Forum, a private think tank and caretakers of a Sufi Shrine in the city of Muree.

Shahaboddin Daraei went on to say that Islam is a religion of peace and teaches brotherhood. He said that if a person has inner peace and satisfaction, he would lay the foundation of a peaceful society.

The diplomat noted that mysticism stresses importance on inner peace which is actually the essence of Islam.

He regretted that today Muslim world is facing lots of problems only because Muslims have left the path of Islam and teachings of Quran.

Daraei believed that by promoting teachings of mystics, we would be able to encounter all conspiracies against Islam.

President Chairman of Islamabad Policy Research Institute (IPRI) and former Ambassador Abdul Basit said that we have to look the menace of terrorism at different levels.

He said that instead of making pledges, there is a need for practical steps to root out terrorism from Muslim countries and portray a positive image of Islam in the world.

The analyst was of the view that changes occurring in the world have nothing to do with Islam. He added that Islam and politics are inter linked and this is the true message of Islam.

“We have to solve our problems by following the path of Islam and teachings of Quran,” he said.

Member of Islamic Ideology Council Allama Iftikhar Hussain Naqvi, expressing his views, said Muslims have to remain vigilant against Western conspiracies. “We should promote love instead of hate,” he stressed.

The religious leader expressing his views said Islam was not spread by sword but by love and this is what we have to practice.

Other speakers on the occasion also urged the need for promoting peace and brotherhood among the Muslim world. They believed that by following the teachings of Sufis, Muslim world can come out of its problems.

They called for unity among Muslim world to encounter all conspiracies against them.

They added that Islam has no space for terrorism and the phenomenon of terrorism cannot be linked to any specific religion.