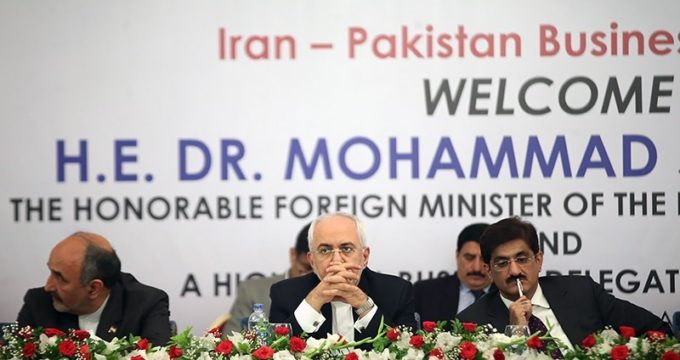 Iranian FM calls for expansion of trade ties with Pakistan

IRNA – Foreign Minister of Iran Mohammad Javad Zarif highlighting the strong relations between Iran and Pakistan in various fields called for expansion of trade and economic cooperation between the two countries.

He said this while addressing a gathering of Pakistan-Iran business forum in port city of Karachi organized to celebrate seventy years of Iran and Pakistan diplomatic ties.

He said that there existed huge potential of trade and investment on both the sides, which needed to be efficiently exploited.

Iranian foreign minister was on a three-day official visit to Pakistan and heading a high profile business delegation.

Zarif said Iran and Pakistan have deep religious and cultural ties which should be transformed into strong economic cooperation to the benefit of the two nations.

Mohammad Javad Zarif on the occasion recalled that Iran was the first country who recognized Pakistan as an independent country.

He continued, both the governments would have to sit together for removal of tariff and non-tariff barriers, simplification of the Customs procedures and establishing banking channel, earliest execution of Iran-Pakistan Gas Pipeline, signing of Free Trade Agreement.

He said that Iran was ready to help Pakistan meet its electricity demand to a great extent.

‘Iran can be a reliable source for Pakistan to get gas and electricity. We are very much capable to produce as much electricity as Pakistan wants,’ he reaffirmed.

Zarif said that both the countries could partner in many sectors like energy, science and technology, infrastructure, chemicals and human resources development.

A presentation was given by a member of Iranian business delegation to highlight the economic potential of Iran and the opportunities for joint ventures with other countries.

Federation of Pakistan Chambers of Commerce and Industry (FPCCI) Senior Vice President Syed Mazhar Ali Nasir maintained that both the countries were not fully aware of each other’s economic potential, which called for enhanced exchange of information and trade delegations.

He said that there was need for holding Single Country exhibitions on each other’s land.