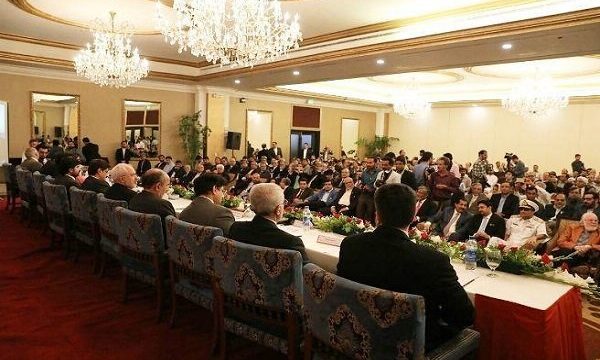 MNA – Iranian Foreign Minister Moammad Javad Zarif who is visiting Pakistan on a three day trip, arrived in Pakistani port city of Karachi on Tues. and opened a joint business forum there.

The Iranian top diplomat, who left Tehran for Islamabad on Sunday afternoon heading a 30-strong politico-economic delegation, arrived in Karachi on the second day of his visit to Pakistan on Tuesday.

Also in Karachi, Mr. Zarif paid an official visit to the Tomb of Muhammad Ali Jinnah to pay homage to the late founder of Pakistan.

Earlier on Sunday, former Pakistani Minister of Information and Broadcasting Firdous Ashiq Awan told the Iranian media that Zarif’s visit to Islamabad will have an important role in opening up a new chapter on the two countries’ sustainable relations and clear up certain misunderstandings on regional and global issues.

Zarif’s visit to Pakistan will greatly contribute to building trust and expanding bilateral cooperation between Tehran and Islamabad, she said.

“Although the visit of the Iranian foreign minister will have a remarkable impact on expansion of trade and economic ties, in my opinion the visit will mostly focus on evaluating the current state of the region and clearing up misunderstandings on regional and global issues,” she stressed.