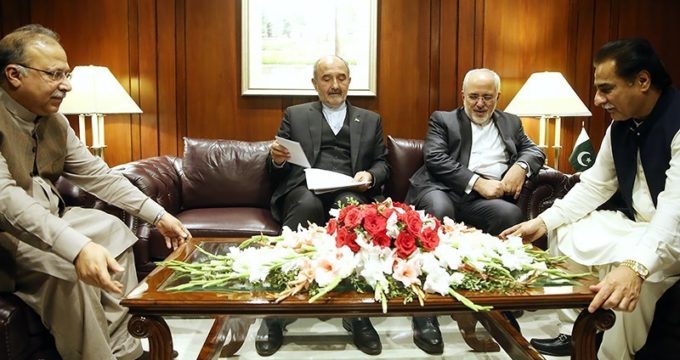 “The six-nation parliament speakers conference was very successful and the next edition will be held in Tehran,” said Pakistani Parliament Speaker Sardar Ayaz Sadiq on Monday. The Pakistani top lawmaker made the remarks during a meeting with Iranian Foreign Minister Mohammad Javad Zarif in Islamabad.

Hosted by the National Assembly of Pakistan, parliament speakers from Iran, Afghanistan, China, Pakistan, Russia and Turkey participated in a three-day conference in Islamabad in December. The theme of conference was “the challenges of terrorism and inter-regional connectivity”.

“Iran is not just a neighboring country for Pakistan but is a friend and brother state for Pakistan,” reassured the Pakistani top legislator.

Mr. Zarif and Mr. Sadiq, then exchanged views on banking relations, security and regional issues, and the crises in Syria and Yemen.

Mr. Zarif, who is heading a 30-strong politico-economic delegation, left Tehran for Islamabad on Sunday afternoon.

During his three day stay he will hold talks with senior Pakistani officials, including president and the Chief of Army Staff.

Earlier on Sunday, former Pakistani Minister of Information and Broadcasting Firdous Ashiq Awan told the Iranian media that Zarif’s visit to Islamabad will have an important role in opening up a new chapter on the two countries’ sustainable relations and clear up certain misunderstandings on regional and global issues.

Zarif’s visit to Pakistan will greatly contribute to building trust and expanding bilateral cooperation between Tehran and Islamabad, she said.

“Although the visit of the Iranian foreign minister will have a remarkable impact on expansion of trade and economic ties, in my opinion the visit will mostly focus on evaluating the current state of the region and clearing up misunderstandings on regional and global issues,” she stressed.