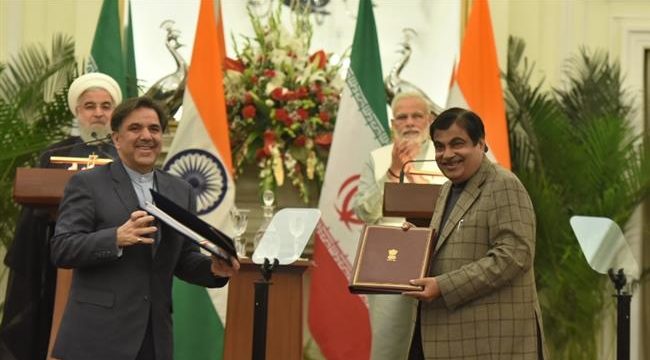 Al Monitor | Sumitha Narayanan Kutty: At first glance, Iranian President Hassan Rouhani’s recent visit to India made news for all the right reasons. The three-day tour Feb 15-17, his first state visit to India, revolved around furthering economic engagement between the two countries. The optics were great, and the announcements following his “substantive talks” with Indian Prime Minister Narendra Modi received praise. Close observers would have noted, however, that the visit did not break new ground. Rather, it laid bare the reality that both sides are hedging their bets based on the potential exit of the United States from the major powers’ nuclear deal with Iran.

Indeed, Iran is once again wooing its Asian customers and partners as European investments continue to be held hostage to President Donald Trump’s rhetoric against the nuclear deal and, more broadly, Iran. India, though keen on the potential gains from the Joint Comprehensive Plan of Action (JCPOA), now anticipates the fallout of a US exit and has recalibrated its investments and expectations accordingly. New Delhi has repurposed its to-do list on Iran, culling it to the absolute essentials key to New Delhi’s primary strategic interest in its neighborhood — namely, connectivity.

India has long worked toward linking its ports to the southeastern Iranian port of Chabahar to be able to bypass Pakistan in moving goods to and from Afghanistan. The route via Iran cuts transit costs and saves time while also offering access to landlocked Central Asia and beyond. It is this connectivity that chiefly drives the relationship between India and Iran today. India is currently financing an upgrade of the Shahid Beheshti Port in Chabahar and is set to spend around $85 million to equip two new terminals by the end of the year. It will also operate the new terminals with an initial 10-year lease.

The Chabahar port project has not, however, been spared the risks associated with Washington’s tough talk. A private Indian firm will be responsible for the operation and maintenance of the new terminals and thus integral to its success. The bidding process to select a firm has taken more than a year, and at least two rounds, with the Indian Ministry of Shipping now determined to announce a winner by the end of March. Although the Iranians were keen to attract European equipment for their new terminals, no preferred firms entertained bids. As a result, Shanghai Zhenhua Heavy Industries Company (ZPMC)— a Chinese crane company that in an interesting twist is banned in India — has surfaced as the first to supply equipment.