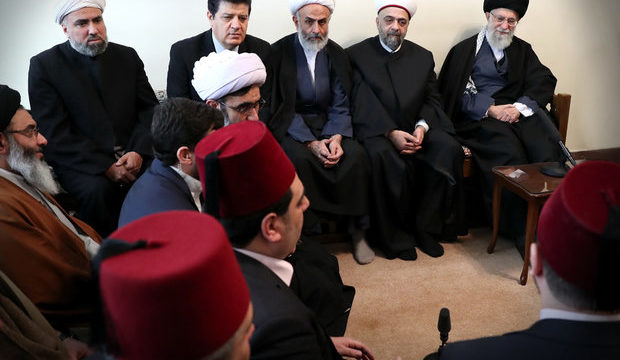 khamenei.ir- The following is the full text of the speech delivered on March 1, 2018 by Ayatollah Khamenei, the Supreme Leader of the Islamic Revolution, in a meeting with Muhammad Abdul-Sattar al-Sayyid – the Syrian Minister of Awqaf [religious endowments] – and a number of Syrian scholars.

All praise is due to Allah, the Lord of the Worlds, and peace and greetings be upon our Master Muhammad, upon his household, upon his pure companions and upon those who obey them until the Day of Judgment

First of all, I would like to welcome all the esteemed participants, the honorable Minister of Awqaf [religious endowments], the honorable scholars and all the dear participants. I thank the esteemed Minister of Awqaf for his very valuable and eloquent statements. I also thank the group of reciters and poets for their recitation of the Holy Quran and their poems. Both the content and the form were good and exquisite and they had a good performance.

We are by Syria’s side. Today, Syria stands in the frontlines. It is our responsibility to support Syria’s steadfastness. Mr. Bashar al-Assad – the honorable President of Syria – has appeared as a warrior and great resister. He did not let doubt appear in him and he stood firm. This is very important for a nation. The Muslim nations which live with disgrace are not disgraced nations, rather it is their leaders who are disgraced. If a nation has leaders who have a feeling of dignity about Islam and about their identity, that nation will become dear and the enemy will not be able to do a damn thing against such a nation.

We have entered into the 40th year of the Revolution. Since the first day, superpowers in the world joined hands and acted against us. The US, the Soviet Union, NATO, Arab and regional reactionaries all joined hands, but we were not ruined and we achieved growth. What does this mean? The first meaning of this statement is that what great powers want is not necessarily possible. All of them decided that we should be ruined, but we were not ruined. So, it is evident that it is not the case that what the US, Europe and atomic powers in the world want will certainly happen. Well, understanding this truth gives hope and power to nations. Therefore, if we, you and the other elements of the Resistance in the region act in a decisive manner, the enemy will not be able to do a damn thing. This is one issue.

Another issue is that Islam has promised us that victory belongs to the mujahid believers. If faith does not exist, victory will not be achieved completely. If faith exists without jihad and endeavor, there will not be any result. It is our responsibility to support and defend Islam and the Islamic movement.

One of the requirements for this is that we should put aside these denominational and tribal differences. Well, if we put aside these differences, there are some people who are opposed to this and who do not want to let this happen. They provoke some of us and some of our brothers and as a result, they are forced to speak, act and work against the movement of unity. If those who play this role are not affiliated with global and arrogant policies and if their activities do not stem from these policies, they should be ignored. We should not pay attention to these individuals. However, if like the Saudis and some others, this effort to create discord stems from arrogant policies, they should be confronted in a firm manner.

If I say qunut [non-obligatory part of daily prayers in Shia school] during daily prayers but you do not do so, this is not something that creates discord. The essence of the issue is that we should believe in the existence of a single God, in nubuwwat [belief in the Holy Prophet] in divine assistance and in Judgment Day in the true sense of the word. These are the essence of the issue.

I hope that you and we will see the day when you are conductiong public prayers in Quds, God willing. We believe that that day will come. It is possible that this humble person and people like us will not be living on that day, but it will come eventually and it will not come late.

A few years ago, the Zionist government, which is your neighbor, said that they will do such and such a thing against Iran in 25 years. I said that you will not see 25 years from now, so you will not be able to do that! By Allah’s favor, that day will come.