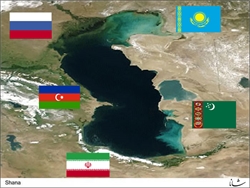 MNA – The Special Working Group of the Caspian Sea held its 50th meeting in Moscow attended by deputy foreign ministers of the five Caspian coastal countries.

The Russian Foreign Ministry said in a statement that the 50th meeting of the Special Working Group on the development of the Convention on the Legal Status of the Caspian Sea was held at the level of deputy foreign ministers of the five Caspian coastal countries in Moscow from February 26 to March 1, 2018.

The participants discussed the implementation of decisions made at the regular Meeting of Caspian Littoral States’ Foreign Ministers, in Moscow, on December 4-5, 2017, during which the ministers coordinated a draft Convention on the Legal Status of the Caspian Sea.

According to the Russian Foreign Ministry’s statement, the Special Working Group verified the texts of the draft Convention on the Legal Status of the Caspian Sea in Russian, Farsi and English as part of efforts to speed up finalisation of the document in time for the upcoming 5th Caspian Summit.

The participants were pleased to announce the completion of negotiations to coordinate a draft Protocol on Environmental Impact Assessment in a Trans-Boundary Context to the Framework Convention for the Protection of the Maritime Environment of the Caspian Sea, signed on November 4, 2003.

The delegations approved the results of the negotiations and thanked the Russian Federation for the high level at which the meeting was organised.

The next meeting of the Special Working Group will take place in the Republic of Kazakhstan, with the date to be agreed through diplomatic channels.