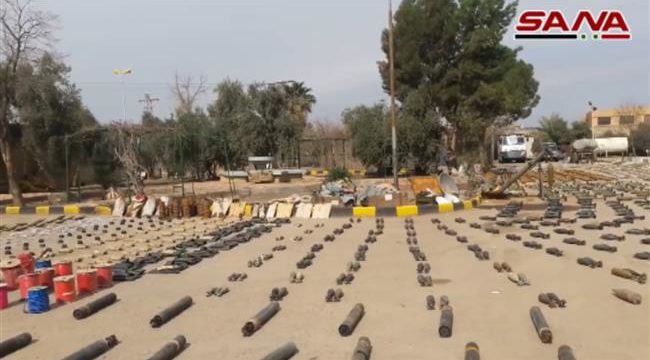 The video shows a cache of rockets, mortars, tank shells and other ammunition that terrorists left behind in the cities of Bukamal and Mayadin.

Officials say Israeli-manufactured weapons are among the discovered munitions.

Syrian government forces also found a plant for the production of shells and explosives. A package of documents and barrels of an unspecified liquid that could possibly be used to manufacture toxic substances was also among the discoveries.

This was not the first time that the Syrian government forces made such discoveries from terrorist hideouts across the country.

In the latest instance last month, Syrian government forces discovered a considerable amount of Israeli-made landmines, toxic materials and munitions left behind by members of Daesh Takfiri terrorist group in the eastern part of Dayr al-Zawr.

According to Syrian army commanders, several discoveries of this kind prove the direct and systematic support provided to Daesh by a number of regional and trans-regional entities.

Syrian military forces also discovered a large cache of Israeli-made weapons in the strategic town of Mayadin, located about 44 kilometers southeast of Dayr al-Zawr, on October 19.

The weapons included several types of heavy, medium and light firearms that besides Israel, came from some European countries as well as members of the NATO military alliance.

Syria has been gripped by foreign-backed militancy since March 2011. The Syrian government says the Israeli regime and its Western and regional allies are aiding Takfiri terrorist groups wreaking havoc on the country.

In April 2017, Israel’s former minister of military affairs Moshe Ya’alon admitted to a tacit alliance with Daesh, saying the Takfiri group had “immediately apologized” to Tel Aviv after firing “once” into Israel.

Over the past few years, the Israeli military has launched sporadic attacks against various targets on Syrian soil. Earlier this month, the Syrian air defense systems struck an intruding Israeli F-16 fighter aircraft which attacked an army base in central Syria.