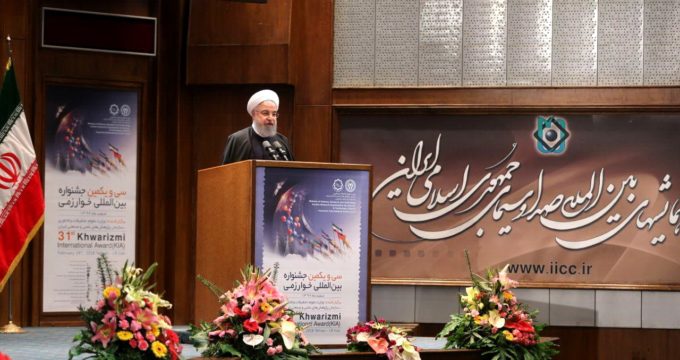 The Iranian president made the remarks at the 31st Khwarizmi International Award (KIA), which is currently underway at the IRIB International Conference Center in Tehran, with a number of Iranian and foreign researchers in attendance.

The president hailed the country’s remarkable progress in aerospace, nuclear and nano technologies, and called on his administration, the Parliament and ministries to provide the necessary conditions and proper atmosphere for ‘free’ and unrestricted research.

“We will not make much progress if we limit our relations with the world,” Rouhani stressed, calling for further scientific cooperation with the world as the only feasible way for the country to make remarkable progress.

The president then criticized efforts and expenses wasted on defining an ‘Islamic’ version of various feilds of science, saying that “science is science; there is no difference.”

“We must take advantage of what the world has already achieved in scientific fields and continue the same path,” Rouhani said.

He further noted that combating air pollution is a top priority for his administration, with good recourses allocated to it in the next fiscal year’s budget, adding that any research with a focus on reducing air pollution and combating dust storms, as well as the water shortage, will be prioritized for funding by the government.