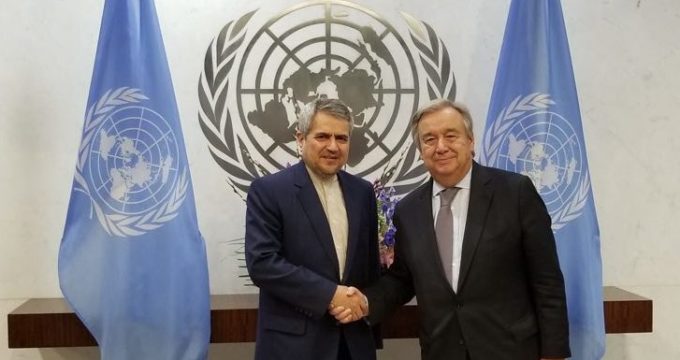 IRNA – Iran’s UN envoy announced on Wednesday that Tehran is ready to cooperate with Martin Griffiths, the United Nations’ new Special Envoy for Yemen, to halt the three-year Yemeni crisis.

UN Security Council’s support for any uncalculated and unilateral measure at the Council would only lead to aggravation of the situation, Gholamali Khoshroo, Iran’s Ambassador and Permanent Representative to the UN Gholamali Khoshroo said in a meeting with Secretary General of the international body António Guterres.

Pointing to the deplorable condition in Yemen, Khoshroo stressed the significance of finding a political solution for the crisis.

For his part, the UN chief said he will make his all-out effort to reach a Yemeni compromise.

The two further underlined the importance of continuation of the diplomatic process to resolve the Syrian crisis.

Iran’s UN envoy also presented an invitation to Guterres to attend the Norouz celebrations which will be held at the UN Headquarters in late March to mark the beginning of the new Iranian calendar year and is also celebrated worldwide by the Iranians, along with some other ethno-linguistic groups.
Norouz which literally means ‘the new day’ will begin on Wednesday March 21.

The UN chief welcomed the invitation which was submitted to him by Khoshroo on behalf of all of the countries which annually celebrate the occasion including Iran, Afghanistan, Albania, Azerbaijan, Georgia, Iraq, Kazakhstan, Kyrgyzstan, Tajikistan, Turkmenistan and Uzbekistan.