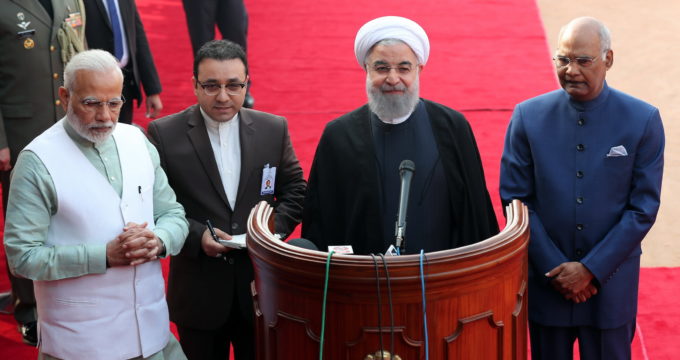 Press TV | Kaveh Sharifian: Iranian President Hassan Rouhani is on a visit to India this week, repaying a trip by Prime Minister Narendra Modi to Tehran in 2016. Before leaving Tehran, Rouhani said relations between the two nations were historical and deep-rooted, and in his first day in India — in the city of Hyderabad — on Thursday he went further to emphasize warm relations between Tehran and New Delhi, saying, “Iran and India enjoy historic and cultural relations that are beyond mere political and economic relations,” hinting at an approach rooted in idealism in international relations, especially with India, rather than one rooted in mere realism.

As Rouhani is visiting India with his high-ranking political and economic delegation that signed major agreements on trade and economic cooperation with the Indian side, here is a glance at relations between the two countries that once shared a common border.

The Shahnameh, or the Book of Kings, the oldest Persian epic composed by the Iranian poet Hakim Abul-Qasim Ferdowsi Tusi (born in 940 CE, completed Shahnameh 1010 CE), has mentioned India in it more than 100 times, indicating the historical and cultural importance of India among Iranians.

Before the British colonization of India, for hundreds of years the Farsi or Persian language was the Indian subcontinent’s lingua franca and used in administrative affairs and considered the language of the nobility and cultured. For hundreds of years, important works in philosophy, literature, politics and even judicial decrees were written in the Farsi language and many scholars believe more Farsi manuscripts exist in Indian libraries than in Iranian ones. The Farsi language was such an integral part of the Indian culture that one of the most prominent schools/styles of Persian poetry is called the “Indian School” of poetry.

Maryam Papi writes about the importance of the Farsi language in India and says:

It is difficult to think of Persian as an Indian language today. Yet for hundreds of years, Farsi held sway as a language of administration and high culture across the subcontinent. It was brought in by Persiophile central Asians during the 12th century, and played a role very similar to the one English does in modern India. So, in the 17th century, when the Marathi Shivaji wanted to communicate with Rajasthani Jai Singh, the general of the Mughal army in the Deccan, they used Farsi. The elite of 19th century Bengal were bilingual in Farsi and Bangla. Raja Rammohan Roy edited and wrote in a Farsi newspaper, and the favorite poet of Debendranath Tagore, Rabindranth’s father, was Hafez, a 14th century poet from Iran. So impactful was Farsi’s role that India’s largest language today, Hindi, takes its name from a Farsi word meaning “Indian.”

Farsi’s official status was replaced with English in 1835 by colonizing forces through the British East India Company which was an imperial vehicle for establishing the economic and political domination of Britain in the entire Indian subcontinent.

After independence from Britain in August 1947, India and Iran briefly became neighbors with hundreds of kilometers of shared borders. With the partition and creation of Pakistan, India’s boundaries with Iran were replaced with Pakistani borders, thus causing distance between the two nations. But more important than geographical boundaries was the influence of the Cold War. Iran’s previous monarchial regime signed the US-supported Central Treaty Organization (CENTO), as an extension of NATO into the Middle East to bloc Soviet Union influence, along with the United Kingdom, Iraq, Turkey and India’s archrival Pakistan. This is while India founded and joined the Non-Aligned Movement (NAM) which, regardless of its designation, had closer ties with the former Soviet Union.

Although the two countries had allegiance to different political blocs, relations were mostly cordial and over the period of almost 30-years, until the Islamic Revolution in Iran, several leaders and prime ministers from both countries exchanged visits. Iran’s toppled monarch, Mohammad Reza Pahlavi, visited India in 1956. Subsequently, Indian Prime Ministers Jawaharlal Nehru and Indira Gandhi visited Iran in their years of tenure.

After the 1979 revolution in Iran, the CENTO alliance crumbled and Iran quickly joined NAM declaring it had no alliance with the US or the Soviets. This seemed to temporarily boost relations between Tehran and New Delhi. However, tensions arose as a result of Iraq declaring an imposed 8-year war on Iran and the fact that India had very close relations with the dictatorial regime of Saddam Hussein in Iraq and Iraqi MiG pilots were trained in India in the 80s. Even more worrisome for Iran was that from 1958 to 1989 Iraq had provided flying instructors to train Iraqi cadets and assisted in conducting operational fighter, transport and helicopter conversions at other bases.

After the Iran-Iraq war and especially after the deterioration of ties between India and the Ba’athist regime in Iraq due to Saddam Hussein’s occupation of Kuwait, relations between Iran and India improved dramatically and in 2001 reached a high point when then Indian Prime Minister Atal Bihari Vajpayee visited Tehran and signed the  ‘Tehran Declaration.’ The two nations declared that they realized and were “Conscious of the civilisational affinities and historical links between the two countries,” and that they note “their shared interests, common challenges and aspirations as two ancient civilizations and as two developing countries.”

The Tehran conference was so fruitful that the two sides announced they were “convinced that strengthened bilateral relations will be mutually beneficial and enhance regional peace and stability,” and that Iran and India sought “to build upon the desire of the peoples of both countries to develop closer ties.”

Continuing the policy of “developing closer ties,” former Iranian president Mohammad Khatami visited India in 2003 as the Chief Guest of the Republic Day parade, where he signed “The New Delhi Declaration,” in line with the previous resolution in Tehran, further expanding bilateral ties.

The new era of heightened relations particularly displayed an enormous increase in purchases of Iranian crude by India. In 2009 right before the fourth round of UN sanctions on Iran, India had accounted for close to 40% of Iran’s oil exports, making it the second-largest importer of Iranian crude after China.

In 2013, the US continued insistence that India should abstain from buying Iranian crude and that New Delhi should completely freeze its economic and financial transactions with Iran. But unlike in 2009, India did not bow to US pressure and continued its tradition of buying oil from Iran.

Nevertheless, in all the turbulent period between the adoption of UN sanctions and the 2015 nuclear deal, struck between Iran and the P5+1 — the US, UK, Russia, France, China, and Germany — bilateral relations between the two countries remained cordial, regardless of Western and UN pressures on Iran.

Modi’s visit to Iran in May 2016 marked a new beginning in bilateral relations. The premier held talks with Leader of the Islamic Revolution Ayatollah Ali Khamenei and Rouhani, and New Delhi announced that Indian refiners had cleared part of the $6.4 billion owed to Iran for crude oil imports.

During Modi’s visit to Tehran, India and Iran signed a $500 million deal to build and operate the port of Chabahar on the southern Iranian coast, aimed at boosting connectivity with Afghanistan and central Asia.

As a result of the better times, non-oil trade between Iran and India reached $4.74 billion in the 12 months that followed March 2016, up by 4.17% compared to the same period in the previous year.

A future of ‘expanded’ relations

Rouhani’s trip to India is the latest stage of a burgeoning relationship between the two countries. In their latest round of talks, Rouhani and Modi expressed their respective countries’ preparedness for the enhancement of the relations at the Indian prime minister’s Hyderabad House in the Indian capital, indicating a return to the height of relations in the early 2000s and a possible crafting of a strategic relationship between the two nations.