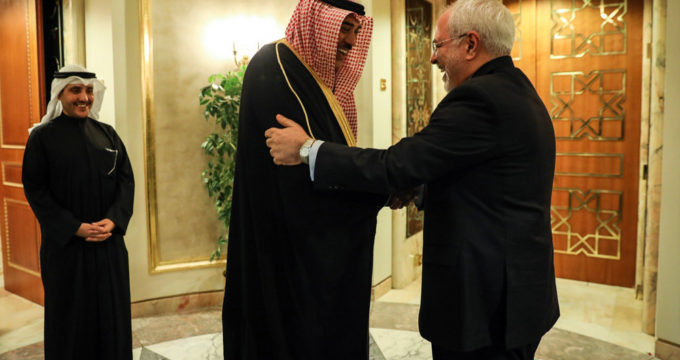 February 14, The Iran Project – At the head of a politico-economic delegation, Iranian Foreign Minister Mohammad Javad Zarif traveled to Doha on Tuesday (Feb.13) to attend the Kuwait International Conference for the Reconstruction of Iraq (KICRI).

Speaking to reporters, Zarif said West Asia will never be in peace if the regional countries have no cooperation, adding that stability and progress of Iraq is of importance for Iran and the Islamic Republic will stand by Iraq forever.

Elaborating on a question as regard Zarif’s aims to create regional dialogue forum, he said Islamic Republic of Iran has always stressed on cooperation between regional countries and Persian Gulf littoral states, adding that “We underline on the fact that region will have no peace if the regional countries have no cooperation”.

The meeting between Zarif and Mogherini was held behind closed doors on the sidelines of the conference.

Meanwhile, the Iranian and Kuwaiti FMs discussed ways to develop bilateral relations, and exchanged views on the most important international issues, particularly those related to the West Asia region.

During the meeting, Zarif expressed hope that neighboring countries and the international community would be able to reconstruct the damages done to Iraq by the terrorists as soon as possible.

The Kuwaiti foreign minister, for his part, thanked Iran for its participation in the conference, stressing that disputes and differences among regional countries must be settled through dialogue and diplomatic means.

The KICRI is scheduled to be held with the attendance of about 50 countries for 3 days. The event aims at gathering financial aids to reconstruct war-torn areas, paving the way for presenting radical solution to internal conflicts, renovation of Iraqi national and local capacities, reinforcing society and balancing the reconstruction process and the national reconciliation program as well as attracting foreign investment.