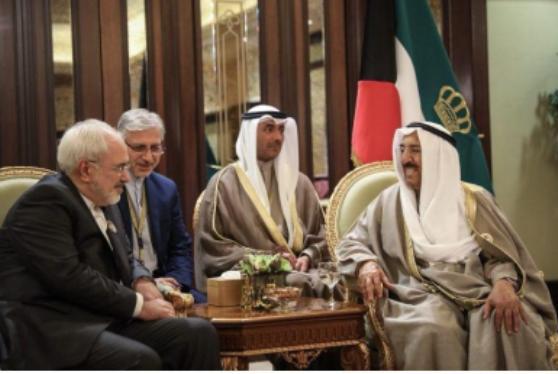 The Kuwaiti emir made the remarks during a meeting with Iranian Foreign Minister Mohammad Javad Zarif in Kuwait City on Wednesday on the sidelines of an ongoing international conference aimed at raising funds for reconstructing Iraq.

Sheikh Sabah also expressed hope that regional countries would resort to talks to settle any possible differences or division between them.

Zarif, for his part, praised bids by the Kuwaiti emir to play a mediating role in regional conflicts, and expressed hope that such efforts would culminate in favorable results.

The two sides also underlined the need for the promotion of ties and direct consultations between the high-ranking officials of the two countries.

The three-day Kuwait International Conference for the Reconstruction of Iraq opened in Kuwait City on Monday with the focus on the reconstruction of Iraq and vital issues concerned following more than three years of war on Daesh that left many parts of the Arab country in ruins.

Iraqi Prime Minister Haider al-Abadi in December declared victory in the war against Daesh, which controlled as much as a third of Iraq’s territory three years ago.

Kuwait’s foreign minister said Wednesday that a total of $30 billion in pledges had been made at the summit. The pledges have come from 76 countries, numerous international funds and global organizations, added Sheikh Sabah al-Khaled al-Sabah.

Baghdad has said it needs far more donations, with officials noting Iraq is seeking between $80 and $100 billion to rebuild the country.

“We were hoping for more,” Iraq’s Foreign Minister Ibrahim al-Jaafari said, adding, “We are not disappointed, but the amount was less than expected.”

Iraqi officials estimate that $17 billion of the needed funds have to go toward rebuilding homes alone. The United Nations estimates 40,000 homes need to be rebuilt in Iraq’s second largest city of Mosul alone. The Daesh war reportedly led to the destruction of 147,000 housing units in the seven Iraqi provinces attacked by the militants.

On the sidelines of the Kuwait conference, Zarif also met with the Iraqi premier.

During the meeting, Zarif reassured the Iraqi prime minister that Iran would spare no efforts to contribute to Iraq’s reconstruction as the Islamic Republic stood by the Iraqi nation and government in the war against terrorists.

Iran sees Iraq as an important political and economic partner, he added.

Abadi, for his part, praised Iran’s role in the anti-Daesh fight and the purge of terrorists from his country’s soil.

He also welcomed Iran’s participation in the reconstruction of Iraq.

Earlier on Monday, Iranian Foreign Ministry Spokesman Bahram Qassemi also said that the Islamic Republic would continue to play a “supportive and constructive” role in Iraq’s reconstruction and economic development.

Iran says it will continue to play its supportive and constructive role in Iraq’s reconstruction and economic development.

He said the Islamic Republic did not hesitate to support the Iraqi nation and government, and it would continue to support them in the fight against terrorism.