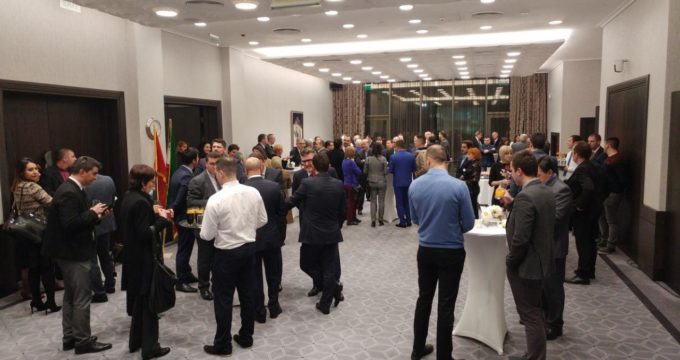 IRNA – The 39th anniversary of Iran’s 1979 Islamic Revolution was celebrated in various countries all across the world on Monday.

In London, the celebration was held in the presence of UK former Foreign Secretary Jack Straw, Chairman of the British Iranian Chamber of Commerce Lord Norman Lamont, numerous ambassadors of different countries, and many Iranian academics, businessmen, and students residing in the UK.

The Islamic Revolution was also commemorated in Santiago, Chile. The ceremony was attended by Chilean Foreign Ministry authorities, the Orthodox Bishop of Chile, representatives of political parties, military brass, foreign diplomats, cultural figures, and some Iranian and Muslims residing in Chile.

On Sunday, there were ceremonies to mark the occasion in other parts of the world.

In Uruguay, some senior officials of the country, including ministers of health, agriculture, and fishing as well as some prominent cultural and artistic figures also attended the ceremony.

An exhibition of Persian rugs was held on the sidelines of the ceremony, and a documentary was screened on Iran’s tourist attractions.

Iran’s Ambassador to Baghdad Javad Torkabadi in a speech that his country will remain beside Syria in the reconstruction era.

In Philippines, Iran’s envoy to Manila hosted the graduation ceremony of a number of Iranian students from Philippines’ universities.

The Russian media also echoed the news and events of the anniversary all across Iran. Eurasia Daily reported on Sunday that Iranians poured to the streets in 1000 cities, and 4000 towns to celebrate the Islamic Revolution anniversary.

The rallies on the occasion are usually an opportunity to chant anti-US slogans, the Russian daily wrote.

News Front, a Russian news website, echoed the reports on the events that were held in Iran to commemorate the occasion. It also referred to the slogans chanted by Iranians to show their disapproval of the US conducts in violation of the nuclear deal it, along with other major world powers, signed with Iran in 2015.

The Russian news agency, Vestnik Kavkaza, reporting the Sunday events, noted that the country put on display the latest military achievements, including its long-range ballistic missiles. It added that hundreds of foreign guests attended the ceremonies.

In Lebanon, media and news outlets covered the huge turnout of Iranian people in the rallies as one of their most important headlines.

Al-Akhbar reported that Iranians sent the message to the US, in the wake of the recent riots in Iran, that Iran’s government is supported by the people.

An-Nahar, another Lebanese daily, wrote that Iran in response to the pressure from the West, displayed one of its missile with a board of 2,000 km downtown Tehran.

In other capitals, including Denmark, Turkey and Bosnia and Herzegovina, the anniversary was celebrated in presence of high-ranking officials.