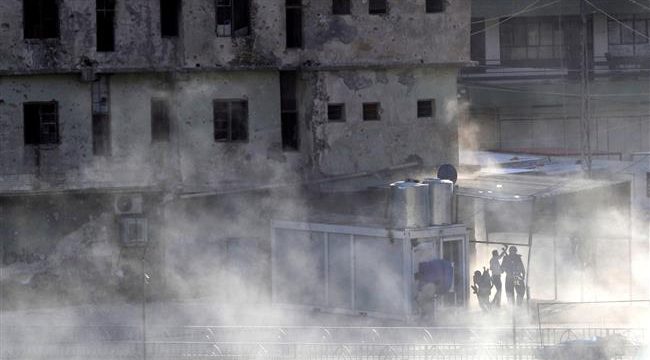 US has no plan to contribute to rebuilding post-Daesh Iraq: Officials

Press TV – US and Western officials say Washington has no plan to allocate money to the reconstruction of Iraq, ravaged by the war against the Takfiri Daesh terror group, at an upcoming international fund-raising conference in Kuwait.

The officials told Reuters on Thursday that Washington does not plan to contribute any money at the conference in Kuwait next week to fund the rebuilding of the war-ridden country.

“Absolutely nothing,” said a Western official, who was speaking on condition of anonymity, when asked whether Washington would announce any financial contributions at the conference to fund long-term reconstruction projects.

A US official also said, “We are not planning to announce anything” at the conference, which will be attended by US Secretary of State Rex Tillerson.

The official, however, said Tillerson could still decide closer to the time to announce a contribution.

Commenting on the issue, State Department spokeswoman Heather Nauert said, “I‘m not aware of any announcements that we will be making.”

Former head of the US Agency for International Development’s (USAID) Office of US Foreign Disaster Assistance, Jeremy Konyndyk, said by not contributing to reconstruction, especially in combat-ravaged areas, the Trump administration could help set the stage for new militancy.

“We’ve seen this movie before. There is a very real risk if the US doesn’t put money into reconstruction, that having just won the battle, you lose the peace,” said Konyndyk, who now works for the Center for Global Development think tank.

James Jeffrey, a former US ambassador to Iraq said, “The fact that we’re not putting any money up will weaken our case, and that’s unfortunate.”

An unnamed US official in Baghdad said, “What we are trying to do in Kuwait next week is to put together companies that want to look at Iraq … and possibly also talk about ways to finance projects.”

US President Donald Trump said during the 2016 US presidential campaign that if elected “the era of nation-building will be ended.”

Iraqi Prime Minister Haider al-Abadi has said his country needs up to $100 billion to rebuild territories that have been torn apart by Daesh.

The Takfiri terrorists captured areas in the north and west of Iraq in 2014 and even managed to reach areas near the capital Baghdad. However, Iraq recaptured the cities, towns and villages one by one, and authorities declared after the liberation of Mosul last July that the country was effectively purged of militants.

The development comes as NATO diplomats said Washington is pressing the Western military alliance to set up a long-term mission in post-Daesh Iraq.

Reuters cited five senior NATO diplomats as saying on Wednesday that US Secretary of Defense Jim Mattis sent a letter to NATO headquarters in January, calling for a formal NATO mission to Iraq with a semi-permanent or permanent command to purportedly train Iraqi forces.

Months after Daesh emerged in Iraq, the US and its allies began a military campaign in Iraq under the pretext of fighting the terror group. The US-led alliance did little to eliminate Daesh, but faced repeated accusations of targeting civilians and aiding Daesh terrorists.

The volunteer forces helping the Iraqi army on the battlefield said on numerous occasions that they have documented evidence showing Washington provides the terrorists with weapons and military support.

The US new plan for Iraq comes as many Iraqi people are calling on US troops to leave Iraq now that the Takfiri group is defeated in the Arab country.

On Tuesday, the Iraqi premier unveiled a plan for the gradual drawdown of US-led coalition forces from Iraq after the collapse of Daesh.

Iraq has been wracked by a vicious cycle of violence since the US invasion of the country in 2003, which has destroyed the nation’s infrastructures.

In January 2009, the United States opened its largest and most expensive $700 million embassy ever built in Iraq, suggesting that Washington was set for a long haul in the Arab country.