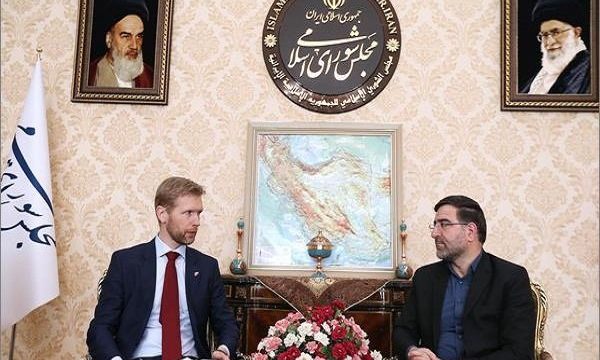 MNA – In a meeting with Chairman of Iran and Norway Parliamentary Friendship Group, Norwegian Ambassador welcomed bilateral cooperation in the fields of oil and gas, fisheries, agriculture and shipping.

In a meeting with Iranian MP Ahmad Amirabadi Farahani, Norway’s Ambassador to Iran Lars Nordrum said that Norwegian government and private companies welcome business cooperation with Iran in the fields of oil and gas, fisheries, agriculture and shipping.

He went on to praise Iran’s contribution to fighting terrorism and narcotics, adding that Iran’s geographical proximity with its neighbor Afghanistan has created a lot of problems for it, making it necessary for the international community to pay more attention to Iran’s effective efforts in this regard.

He concluded by saying that his country supports JCPOA and calls on all countries to abide by their commitments under the agreement.

For his part, Farahani said that there are many opportunities for the two countries to cooperate in political, economic and industrial sectors, which require proper planning and should be based on the interests of the two countries.

He went on to say that the parliamentary relations can play an important role in developing and expanding relations between the two countries.

Expressing regret at the US policy towards JCPOA, he called on the European countries to stand up against President Trump’s administration and not allow international obligations to be discredited.

Noting that Iran itself has been a victim of terrorism, he said, “My country’s efforts in combating terrorism and drug trafficking are aimed at achieving lasting peace and security in the region and in the world.”

He underscored the importance of removing banking barriers, which if achieved could help improve bilateral economic and trade relations in energy and renewable energy sectors and cooperation in joint projects.