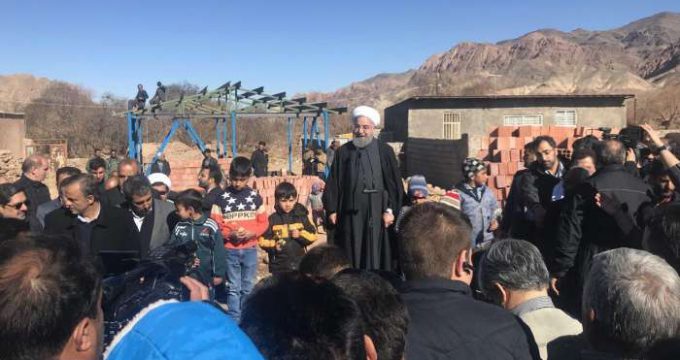 MNA– Iranian President Hassan Rouhani who is visiting south-eastern province of Kerman, paid a visit to villages affected by recent chain of earthquakes in Iran.

On the second day of his tour of Iranian south-eastern province of Kerman, Iranian President Hassan Rouhani paid visit to Hejdak villages in Ravar County to have face-to-face contact with the people affected by earthquake.

Concurrently, Abdolreza Rahmani Fazli, the Iranian Interior Minister, visited Jowr villages in Kouhbanan County of the same province to represent President Rouhani’s administration in extending sympathies and offering help to the quake-hit people of the area.

On Thursday, Mr. Rouhani started his provincial tour landing in Sirjan country as the first stop of his visit where he addressed the local residents at Takhti Stadium of the city and attended the opening of some industrial and mining projects.

After that the Iranian president went to the capital of province, Kerman, to attend the meeting of the bureaucratic council of the province.

The last in the agenda of Mr. President in Kerman will be a presser before leaving the southeastern province for Tehran.