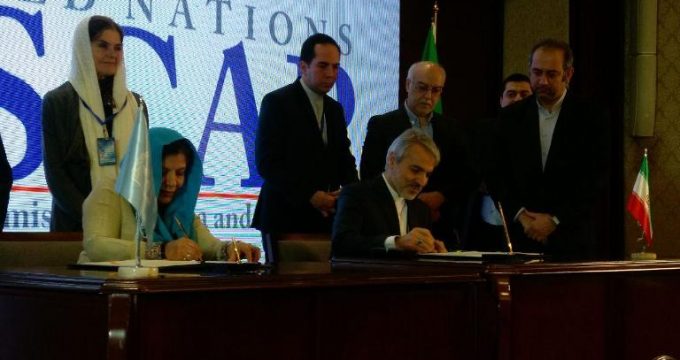 Top UN representative in Tehran to confer with Iranian officials

While in Tehran she signed a MoU with Iran’s Head of the Plan and Budget Organization Mohammad-Baqer Nobakht on establishing Asian and Pacific Centre for the Development of Disaster Information Management (APDIM) office in Tehran.

APDIM which is a center affiliated with the United Nations Economic and Social Commission for Asia and the Pacific (ESCAP) aims to provide ESCAP member states with information on disasters especially earthquake.

In a meeting with Akhtar, Nobakht said establishment of APDIM office in Tehran is expected to significantly promote national interests, adding that the center could promote regional and global peace and a good capacity for Iran and its neighbors to reduce effects of natural calamities.

Talking to IRNA, she said APDIM that was established in 2016 as a regional institution of the Economic and Social Commission for Asia and the Pacific (ESCAP) is working closely with the Islamic Republic of Iran’s Building and Housing Research Centre (BHRC).

Akhtar stated that containing the negative effects of dust and sand storms is also an issue that is related to the seismic risk cooperation between the institute and Iran that has already been strengthened.

“We want to continue to build on this to reduce the destructive effects of sand and dust storms,” she said.

Meanwhile, Zarif and Akhtar discussed various issues in the Asia-Pacific region including the need to use regional capacities and emerging powers to expand cooperation in the economic and infrastructure sectors, and also expand trade cooperation and investments in the Asian continent.

The two sides also expressed concern over the weakening of multilateralism, the decline of international and regional institutions and arrangements, and the rise of serious challenges in this regard.

Moreover, they stressed the need for initiatives by the United Nations, particularly the ESCAP, to manage and prevent such challenges in Asia.