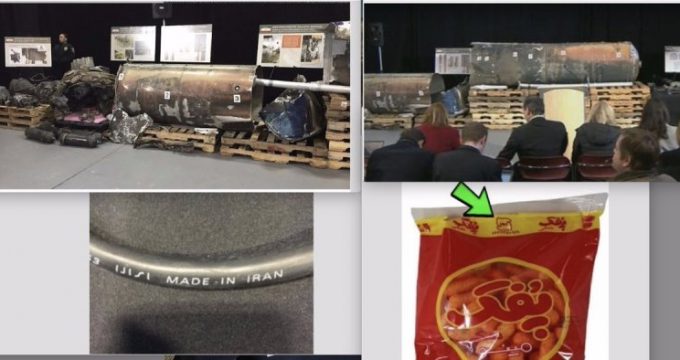 Zarif’s message came after US administration invited the members of United Nations Security Council for a lunch meeting at the White House on Monday to accuse Iran of destabilizing the Middle East and providing ballistic missiles to Yemeni Ansarullah movement.

In his message on social networking website Tweeter Zarif says “in the fake news department, Trump & Co. attempt to create an Iranphobic narrative at the UN Security Council-through wining and dining and fake “evidence” provided by a warring neighbor-that would pass muster with only the same desperate neighbor & its accomplices in war crimes.”

After the US meeting, the UK’s deputy permanent representative to the UN, Jonathan Allen, posted on Twitter pictures that he said were “clear evidence that #Iran missiles and other weapons [were] used by Houthis in #Yemen.”

One of the images shared by Allen showed what seemed to be a visibly intact cable with the writings “Made in Iran” and the emblem of the Institute of Standards and Industrial Research of Iran (ISIRI) on it.

In a post on his own official Twitter account on Tuesday, Foreign Minister Zarif used the picture used by Allen next to one of a packet of Iranian-made cheese puffs with the same ISIRI logo.

The Iranian diplomat wrote, “A while ago US showed a Saudi-supplied Iranian missile intact. They must’ve been told a missile destroyed by a Patriot does not land fully assembled. So now US shows UNSC missile fragments w/ Iranian Standard Institute logo, as on our foodstuffs. Try fabricating “evidence” again.”

“ISIRI [Institute of Standards and Industrial Research of Iran] seal is a measure of quality for Iranian consumer goods. But sadly for Trump & Co, we don’t put it on missile parts. Time for some to do a better job of fabricating,” Zarif also wrote in another message on Tuesday.

Moreover, pictures of purported missile fragments presented by the United States as “evidence” that Iranian-made missiles were used by Yemen have sparked widespread ridicule on social media.

Social media users saw the US as well as Allen stretching themselves far and wide by offering the latest picture with the “Made in Iran” writing and the ISIRI emblem.

On December 14, 2017, US Ambassador to the UN Nikki Haley presented a charred tube and other material that she claimed were from an Iranian-made ballistic missile fired from Yemen at the King Khalid International Airport near the Saudi capital, Riyadh, on November 4. She claimed that that “evidence” proved Iran’s violation of United Nations resolutions banning the transfer of weapons to the Houthi Ansarullah fighters.

Both Iran and the Houthis have denied that the missile fired was Iranian.

Also, Iran’s UN envoy, Gholamali Khoshroo, rejected the charges and said that Tehran’s stance vis-à-vis Yemen is dialogue and peace and opposing bombarding the country which is facing a humanitarian crisis and is in dire need of aid.

The US has not stopped making that far-fetched pitch, however. Then, the US hosted UN Security Council envoys to view the purported missile parts.