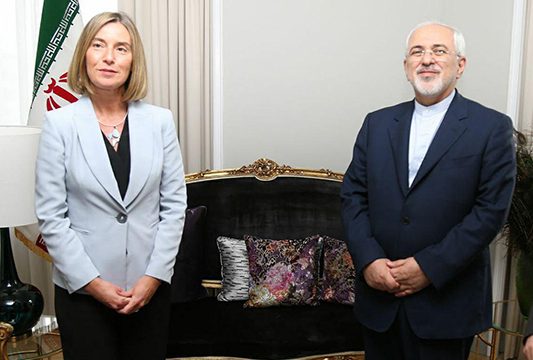 “Iran-Europe talks fruitful if focused on regional issues, not missiles”

IFP- A political analyst says negotiations between Iran and Europe on regional issues can be fruitful and trust-building only if the EU does not raise the issue of Tehran’s missile program.

US President Donald Trump has given Europe four months to reform the nuclear agreement between Iran and six world powers known as the Joint Comprehensive Plan of Action (JCPOA) or to strike a peripheral deal with Iran over the country’s missile activities. Europe is on the horns of a dilemma at a time when all voices inside Iran are saying in unison that the Islamic Republic will not renegotiate the JCPOA, nor will it hold any talks on the country’s missile program. Kayhan Barzegar, an expert on international relations, has told the Persian-language Etemad newspaper that Iran will be a loser if it enters negotiations on its missile program. However, the analyst has underlined in his interview that Iran has the upper hand in regional equations, which means Iran has the potential to turn regional talks with Europe – NOT with the Americans – into a win-win game. Highlights of Barzegar’s interview with Etemad daily conducted by Sara Masoumi follow:

Trump is the one who mostly insists on holding talks, somebody who has stepped into the White House with a new discourse and strategy, and sees the JCPOA as detrimental to Washington’s interests value-wise. As far as values are concerned, Trump is against former US President Barack Obama’s discourse in America’s domestic and foreign policy and somehow seeks to destroy all of them, particularly the JCPOA. In Trump’s point of view, the JCPOA was not an appropriate discourse in getting closer to Iran. And in terms of interests, Trump is of the conviction that the JCPOA has added to Iran’s regional power, which is detrimental to the interests of the US and its allies in the region. Now, he has US interests in mind by agreeing to a proposal on regional and missile talks and to a so-called JCPOA reform plan. Trump believes the Iran nuclear deal was basically meant to bring peace and stability to the region. Now, with the JCPOA having brought Iran out of the international blockade and having depicted a powerful picture of Iran in the eyes of Tehran’s regional friends such as Hezbollah and other political groups in Iraq and Syria, Iran’s power has grown in the region, which, in turn, has made the situation more difficult for the US and its regional allies.

Setting new and tough conditions such as holding talks on Iran’s missile program or imposing new sanctions will practically push the Iran nuclear deal off its original track and makes the agreement pointless.

Accordingly, Trump has linked the issue of regional and missile talks to the JCPOA, and has given European countries and the US Congress a four-month deadline to somehow reform the JCPOA or he will withdraw from the agreement. Trump seeks to show that Iran must not use the JCPOA as a proxy or a lever to further advance its interests in the region. He has added the issue of regional and missile talks to the JCPOA to create a new framework for Iran affairs in the United States’ domestic policy, especially in the Congress, and Washington’s policies in the region. In the eyes of Trump, relations between the US and its regional allies such as Saudi Arabia and the Israeli regime had been weakened due to Obama’s compromising policies, and need to regain their previous status.

With that in mind, one can say that Trump is now seeking to scuttle, or at least undermine the JCPOA as much as possible. Setting new and tough conditions such as holding talks on Iran’s missile program or imposing new sanctions will practically push the JCPOA off its original track and makes the agreement pointless.

On the other hand, Europeans are committed to preserving the JCPOA. The deal is a successful multilateral agreement that boosts Europe’s global influence. Europe may have some domestic problems, but it enjoys a creditable position on the global political arena. From this perspective, geopolitical urgency in the most important principle for Europe when it comes to preserving the JCPOA. Europe is not only worried about the spillover of terrorism and an influx of refugees as a result of conflicts in north Africa and the Middle East region, but is also concerned about the possible outbreak of another conflict in the region as a result of the JCPOA’s being disputed. Trump, too, is cashing in on this concern of Europe and, under the pretext of safeguarding the JCPOA, pushing the Europeans to expand the sphere of nuclear talks to include negotiations on regional issues and Iran’s missile program. It seems that Trump is trying to narrow the gap with Europe and once again form a united front within the framework of a Western alliance against Iran. In fact, Europe sees the JCPOA as a tool to ensure regional stability and global security.

Europe seeks to form a more positive framework for talks with Iran. In the Europeans’ point of view, Iran is the most important and most stable country in the east of the Mediterranean region. They believe negotiations should be held with Iran with a critical, and at the same time constructive look, in a bid to ensure regional stability. Unlike the American perspective, Europe believes Iran’s role cannot be ignored or undermined; rather, as Europe believes, Iran should be brought to the negotiating table to help tackle the regional scourges, especially terrorism.

Europe regards Iran as the most important and most stable country in the east of the Mediterranean region. They believe Iran’s role cannot be ignored or undermined, and it should be brought to the negotiating table to help tackle the regional scourges, especially terrorism.

Of course, Europe’s talk of holding negotiations on Iran’s missile program, and the country’s outright refusal to sit at the negotiating table on that matter make the issue more complicated. Negotiations on Iran’s missile program, which is a national security issue and related to the country’s deterrence capability, would amount to a game where Iran would be the loser and the other side the winner. Europe’s talk of any such negotiations can kill the chances of holding talks with Iran on any issue. On the other hand, negotiations with Europe on regional issues can be fruitful and build confidence. The point is that Iran’s positive role in fighting regional scourges such the ISIS terrorist group is not noticed as much as it should be, due to plots by regional rivals that try to paint a negative picture of Iran. Tehran entering into direct talks on regional issues will give the Islamic Republic the chance to shed more light on its positive role in the region.

In the first glance, European countries, especially France, are bringing up the issue of regional talks in order to rein in Iran’s influence and power in the Middle East. Of course, a distinction has to be drawn between France’s position and that of other European states. French officials are over-influenced by the picture that Saudi Arabia, the Israeli regime and US-affiliated currents have painted of Iran. European countries, France included, should have a more pragmatic look at Iran’s role in the region, so that they will be able to reach tangible results on the path to achieving regional peace and security.

Some people inside Iran believe the Western side wants to sit at the negotiating table with the Islamic Republic in order to contain the country’s leverage in the Middle East; hence, even before such talks begin, they believe Iran will be the loser if such negotiations begin. As a result, the negotiations are not expected to ever begin and bear fruit. However, the methodology used to channel Iran’s diplomacy should not be based on the question “What benefit will European countries, e.g. France, will have for us?” In other words, we should not expect them to hold talks in line with our interests. Rather, Iran should make them understand that their cooperation with Iran in the political and security domains will help serve their interests and ensure their security.

Iran played a key role in defeating the ISIS terror group and is a key player in helping the broad-based government in Iraq go on and promoting peace talks in Syria. Iran plays a role in political equations in Yemen and Afghanistan as well.

The reason why French Foreign Minister Jean Yves Le Drian keeps repeating his call for missile talks even though he knows Tehran is opposed to such negotiations is that Trump has wanted him to do so. In fact, France has the role of Trump’s proxy.

Anyway, by raising the issue of holding talks with Iran, European countries, including France, hope they will be able to create a new atmosphere and secure guarantees that they believe would keep Trump from scuttling the JCPOA or would stop the emergence of another crisis. However, their relative success depends on separating regional talks from negotiations on the missile issue. Military, defence and missile issues are so sensitive for Iran and its people that there is no room for talks on them.

Europe’s success in bringing Iran to the negotiating table depends on separating regional talks from negotiations on the missile issue since military, defence, and missile issues are very sensitive for Iran and its people.

As for the JCPOA, the problem is that Trump is against the deal, which was an achievement of his predecessor Barack Obama. Trump does not have problems with Iran and the JCPOA only; rather, the whole world has issues with Trump’s unorthodox policies. If somebody other than Trump had become US president, the situation could have been different.

Europe’s allies in the Middle East can definitely influence Iran-Europe relations. The Saudis, for instance, can have an impact on the negotiations with their money, lobbies and media outlets. However, the influence they would have on Europe will definitely be not so strong as their impact on Washington. The Europeans look at Saudi issues with a more critical look. The issue of the Al-Qaeda terrorism being linked the Saudi Arabia, the ISIS’ connection with Wahhabism and Riyadh’s large-scale bombardment of defenceless Yemeni people are condemned in the court of public opinion in Europe.

Another point is that Iran should not rush to pull out of the JCPOA even if the US or Europe withdraws from it. Iran’s withdrawal from the agreement will have no benefit for the country. One way or another, the JCPOA at least legitimized Tehran’s nuclear program as far as Iran’s cooperation with the International Atomic Energy Agency (IAEA) is concerned, and showed the program has no military dimensions. Nevertheless, the US can have many negative impacts on the implementation of the JCPOA. In fact, the United States’ only contribution to the agreement was that the country hindered trade between Iran and Europe.

Even if the US and Europe pull out of the JCPOA, Iran will not have to say it wants to withdraw from the deal. Like the era before the JCPOA was signed, Iran can continue to have relations with China, Russia, India, Turkey, Iraq, South Korea, Japan and other countries. Europe and the US are not the whole world. We are in the post-globalization age. In other words, having relations with Europe does not necessarily guarantee development and the accumulation of wealth.

All in all, Europe has a strong desire to preserve the JCPOA, and would do anything to do so. Europe would do that in order to preserve its own interests. So, the Europe-US coalition cannot be expected to take the same form it used to. The logic behind that coalition was to threaten Iran’s nuclear program to, as they put it, ensure international security. Now, that logic is rejected altogether.