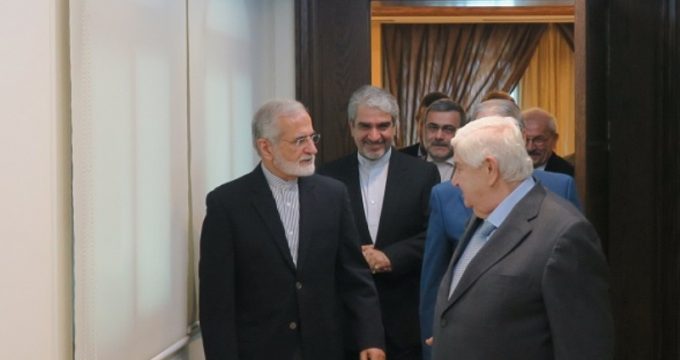 IRNA – Despite significant developments in Syria, the US is still insisting on intervention in the country, Syrian Foreign Minister Walid Muallem said.

Astana, Geneva and Sochi talks show that the political scene is still of importance for resolving Syrian problems, Muallem said in a meeting with Iranian former foreign minister and Head of Strategic Council on Foreign Relations Kamal Kharrazi.

All decision should be made in line with people’s interests and without imposing foreigners’ ideas, he said.

The constitutional law should be written inside the country and with the attendance of all Syrian groups, he added.

Syrians will not accept laws written outside the country, he noted.

Kharrazi, for his part, stressed on more coordination among unified countries.

In spite of the recent victories in the battlefield, attempts should be made for restoring sovereignty to Syria, he said.

Rules must be written so that the future of the Syrian people is included, he added.