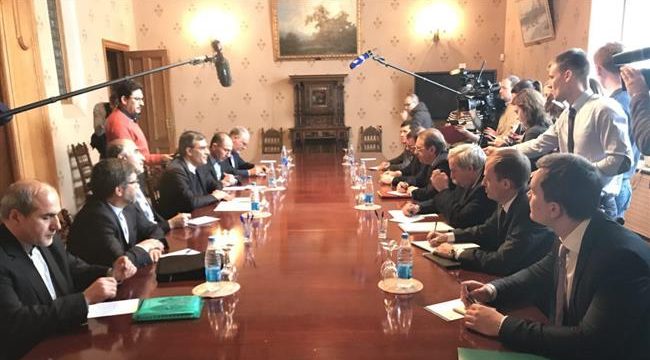 Iran deputy FM in Russia to attend talks on Syria

He also participated in a trilateral preparatory meeting attended by Lavrentiev and Turkish Deputy Foreign Minister Sedat Önal on Saturday in Sochi of Russia.

The three diplomats who head delegations from their countries discussed the latest arrangements in preparation for the national congress for peace in Syria.

Talking to Bogdanov, Jaberi Ansari said the developments in the Middle East and Arab World prompt consultations by Iran and Russia.

Baghdanov, for his part, said that “it is important for us to discuss the developments and exchange our evaluations and viewpoints with Iranians.”

Russian official stated that the presidents and foreign ministers of the two countries have close co-operation, which reflects the strong and strategic ties between Iran and Russia.

Also, Jaberi Ansari and Lavrentiev talks were mainly focused on arrangements for the holding and programs of the upcoming Syrian National Dialogue Congress scheduled to be held in Sochi on January 29-30.

The two sides  made the necessary arrangements for the trilateral meeting of representatives of the three guarantor states of Astana peace process (Iran, Russia, Turkey) that will be held later today in Sochi.

The Syrian People’s Congress is slated to be held in the Russian Black Sea resort of Sochi on February 1st.

The meeting was opened by the Russian delegation presenting the measures undertaken in preparation of the national congress. It was continued by comments from Iranian and Turkish delegations.