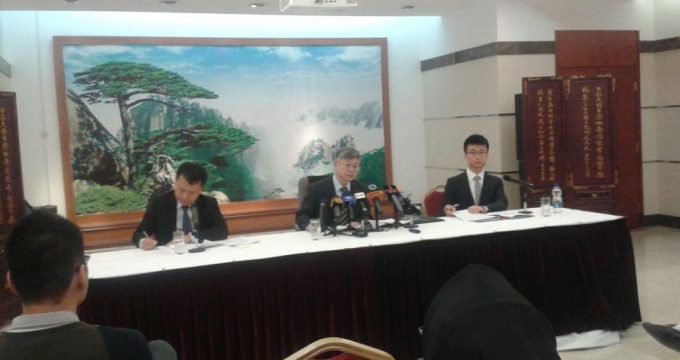 IRNA – Chinese ambassador to Iran dismissed all the rumors about Iranian oil tanker which sanked recently in the Chinese Sea following collision with another ship.

‘Some negative voices in the cyber atmosphere will not affect Iran-China friendly relations,’ Pang Sen said in a press conference on Sunday.

He said that the Chinese rescue team has done its best to help the Iranian sailors who have been trapped in the ship and has taken help from the neighboring South Korea and Japan rescue teams.

The official said that China will continue searches for recovering the bodies of Iranian and Bangladeshi seaman killed in the incident.

He said that the voyage data recorder or “black box” is in Port of Shanghai and will be opened with the presence of Iran, China and Panama representatives.

In the meantime, senior Iranian lawmaker lauded positive role of China in helping the Iranian sailors who have been trapped in an Iranian oil tanker, which sank in the Chinese Sea recently.

Reports released about lack of commitment by Chinese officials to help the Iranian sailors was the ‘US propaganda’, Chairman of Majlis (Parliament) National Security and Foreign Policy Commission Alaeddin Boroujerdi said on Sunday.

He said, according to the National Security and Foreign Policy Commission’s survey, the reports that blame china for not helping the Iranian oil tanker are wrong.

All Sanchi crew members, including 30 Iranians and two Bangladeshi sailors, were killed because of toxic gases and the huge fire which embraced the tanker after the ship collided with a Chinese freighter in the East China Sea on January 6.

All rescue efforts were in vain and the tanker sank on January 14.