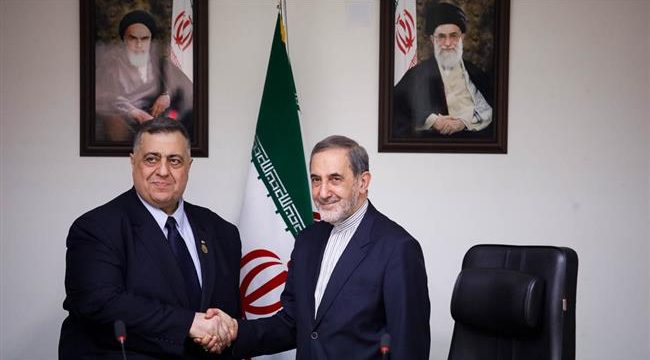 “Major plots hatched against Syria were all foiled through Iran-Syria cooperation,” Speaker of People’s Council of Syria Hammouda Youssef Sabbagh said in a Wednesday meeting in Tehran with Ali Akbar Velayati, a senior advisor to Leader of the Islamic Revolution Ayatollah Seyyed Ali Khamenei.

Sabbagh lauded Iran’s support for his country, saying that the Islamic Republic had stood by Syria in the harshest times.

He underlined the need for Tehran and Damascus to maintain the high level of bilateral relations in all areas, saying that a reconstruction process in Syria must be planned in such a way so that Iran would play a major part in it.

For his part, Velayati praised growing relations between Iran and Syria, saying the bilateral ties had been growing since the Islamic Revolution in Iran nearly four decades ago.

Earlier on Wednesday, the Syrian official, who visited Tehran for the 13th Session of the Parliamentary Union of the Organization of Islamic Cooperation (OIC) Conference in Tehran, also met with Iranian Foreign Minister Mohammad Javad Zarif.

During the meeting, Zarif praised the resistance of the Syrian government and nation against plots and their victory against terrorists.

He said Syria’s victories against terrorists had prompted the US and the Israeli regime to pursue new “destructive plans” in favor of terrorists.

Sabbagh, for his part, commended Tehran’s support for Damascus, saying “Iran is our main partner in the resistance, victories, political process and reconstruction of Syria.”

He said that the holding of the 13th Session of the Parliamentary Union of the OIC members was an example of Iran’s successful diplomacy, adding that Muslim countries could thwart all plots through unity and solidarity.