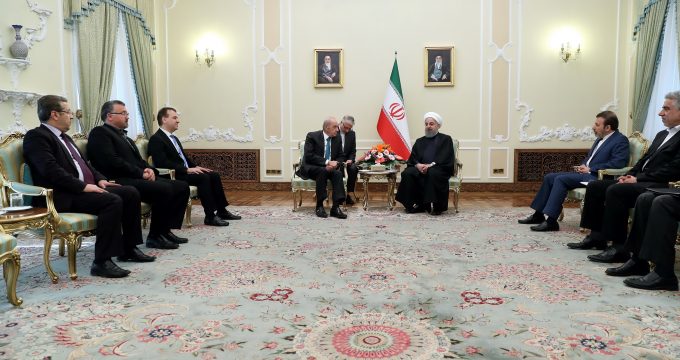 president.ir- President Hassan Rouhani met with the Speaker of the Parliament of Lebanon, Nabih Berri, on Wednesday and expressed happiness over stable condition in Lebanon, saying: “Strengthening stability, development and unity in Lebanon brings happiness to Iranian nation”.

“Without a doubt, Zionists take advantage of promoting discord and disagreement in Lebanon, as they thought that they could keep ISIL terrorists in this region for long,” continued Rouhani.

Dr Rouhani said that in recent months, the true nature of some regional governments has been well-clarified for the nations of the region and the world, adding: “We must pass through this path in this difficult situation of the region, with increased consultation and cooperation and leave the problems behind”.

President also described the development of Tehran-Beirut economic, commercial, political, regional, and international relations and essential and continued: “The Iranian government and nation have always stood by the Lebanese government and nation be on the path to resisting the Zionist aggression, and will continue to do so”.

Dr Rouhani said: “There is a real interest, affection and brotherhood between the people of Iran and Lebanon, and the Iranian people have a special respect for the people of Lebanon as a cultured, brave and hard-working nation”.

The president said: “All countries of the region should work with all their might to restore stability and security to the region, and there is no other choice”.

He also expressed hope that all the countries of the region use their capabilities to strengthen stability, security and unity, and not allow foreign powers, especially the Zionist regime and the US, to succeed in sowing discord in the region.

“We are always looking forward to a better future for the region, and we know that with unity, jihad and ijtihad, we can achieve our goals despite hardships,” said Rouhani adding that the Islamic countries are more responsible than ever before and must increase their interaction”.

At the meeting, the Speaker of the Parliament of Lebanon, Nabih Berri, also appreciated the Islamic Republic of Iran for supporting the resistance of the Lebanese people against the Zionist enemy.

Saying that today we are witnessing a good unity in Lebanon, he said: “Iran has played a positive role in resolving crises in the countries of the region.”

Nabih Berri also described the US government’s stance on the Holy Quds as promoting crisis in the region.