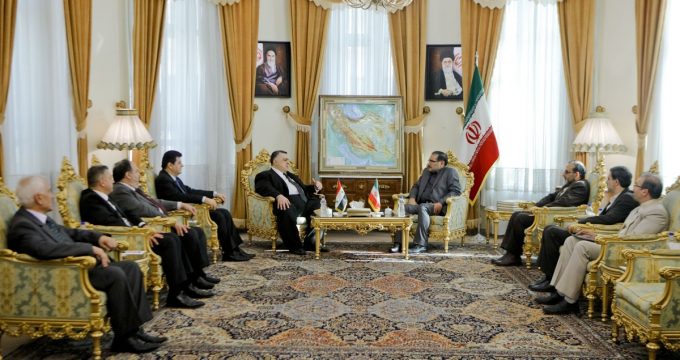 Press TV- Secretary of Iran’s Supreme National Security Council (SNSC) Ali Shamkhani says the tactic of instilling fear in the international community of decisions made by a madman in the United States is hackneyed and will bear no fruit.

“The US ruling administration is in global isolation due to unwise decisions and repeated mistakes,” Shamkhani said in a meeting with the Speaker of People’s Council of Syria Hammouda Youssef Sabbagh in Tehran on Monday.

He criticized US President Donald Trump’s remarks about Washington’s possible withdrawal from the 2015 multilateral nuclear agreement and the need to make changes to its text.

The Iranian official emphasized that such a propaganda campaign was aimed at spreading Iranophobia and preventing the Islamic Republic from enjoying the economic benefits of the nuclear agreement, known as the Joint Comprehensive Plan of Action (JCPOA).

The US president on January 12 reluctantly agreed to waive sanctions against Iran that were lifted as part of the JCPOA, but said it would be the last time he issued such a waiver unless his conditions were met.

Trump once again threatened to withdraw from the nuclear deal if some “disastrous flaws” were not fixed, saying that he wanted America’s European allies to use the 120-day period before sanctions relief again came up for renewal to agree to tougher measures and new conditions; otherwise Washington would pull out of the deal.

Iran’s foreign minister slams the US president’s announcement on Tehran’s nuclear deal as a “desperate attempt.”

He responded on Twitter that the deal was not renegotiable and that Trump’s stance “amounts to desperate attempts to undermine a solid multilateral agreement.”

Elsewhere in his remarks, Shamkhani stressed the importance of promoting dialogue in Syria to support the country’s legitimate government.

“Any political or military measure aimed at granting a part of the Syrian land to terrorist groups or the occupation of  Syrian territory by foreign powers is against the interests of the [Syrian] people and a threat to regional countries and is doomed to fail,” the SNSC secretary said.

Shamkhani’s remarks followed reports denoting that the so-called military coalition led by the United States in Syria is planning to set up a new large border force of up to 30,000 personnel with the aid of its militia allies in the war-torn country, a move that will further infuriate Turkey, a NATO ally, which is already angry over Washington’s strong support for Kurdish-dominated forces in the Arab country.

The US-led military coalition reportedly plans to set up a new border force of 30,000 personnel in war-torn Syria.

A top Turkish official, speaking on condition of anonymity, told Reuters on Sunday that the main reason behind summoning Philip Kosnett, the American charge d‘affaires in Ankara, last week was in fact Washington’s training of the new “Border Security Force (BSF)” within Syria, a move that was denounced by Turkish President Recep Tayyip Erdogan’s spokesman, who called it “worrying.”

Shamkhani said inflicting damage on the strategic interests of Muslim countries, including their security and economic development, was the top priority of countries, which are pursuing plans to sow discord and cause more insecurity in the region.

The top Syrian parliamentarian, for his part, said the illegal and aggressive US presence in Syria was aimed at supporting terrorist groups.

Sabbagh added that the Syrian government and nation opposed the US presence in their country.