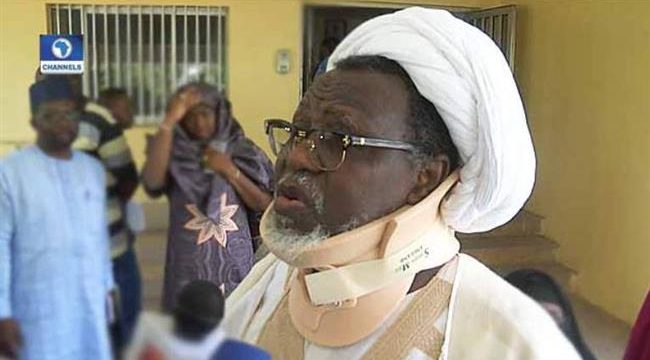 Releasing footage of Zakzaky is not enough: Islamic Movement in Nigeria

Press TV – The Islamic Movement in Nigeria (IMN) has said the government’s release of an edited video of their leader Sheikh Ibrahim al-Zakzaky will not placate calls for the Shia cleric’s immediate release.

On Sunday, the IMN released a statement stressing that it will continue with its peaceful demonstrations until their leader released.

“There is therefore no justification whatsoever to be satisfied by a few seconds of video clip of an illegally incarcerated Sheikh. It is absolutely a matter of complete freedom that he deserves or nothing at all for the Sheikh in our view,” read the statement.

On Saturday, Sheikh Zakzaky made his first public appearance since he was illegally detained by security forces in 2015, in footage released by the Department of State Services.

It was unclear under what circumstances Zakzaky gave the interview, which was released after rumors of his death spread on the Nigerian social media this week.

The footage “falls very short of expectations of his total and unconditional freedom as ordered by the Federal High Court Abuja,” said the IMN statement, adding that they would not be fooled by the government’s “antics.”

Despite the ruling of a Federal High Court, which ordered his unconditional release in 2016, the Nigerian government has refused to set him free.

“We are not unmindful of the fact that Sheikh Zakzaky has not committed any crime, and his detention under whatever guise and pretence has been ruled by a competent court in our land as unconstitutional and a breach of his fundamental rights,” it added.

“We are not placated by Sheikh Zakzaky’s short and edited video clip. The local and global Free Zakzaky campaigns will most certainly continue. Our goal is not to see Sheikh Zakzaky in a controlled press clip but our goal is the unconditional freedom of sheikh Zakzaky and his wife as ordered by a competent Nigerian Court. Nothing short of that will suffice” concluded the statement.

Zakzaky lost his left eye sight in a raid, which was carried out by the Nigerian army on his residence in the northern town of Zaria back in December 2015.

During the raid, Zakzaky’s wife sustained serious wounds too and more than 300 of his followers and three of his sons were killed. Zakzaky, his wife, and a large number of the cleric’s followers have since been in custody.

The clergyman is said to have been charged with “criminal conspiracy and inciting public disturbances.”