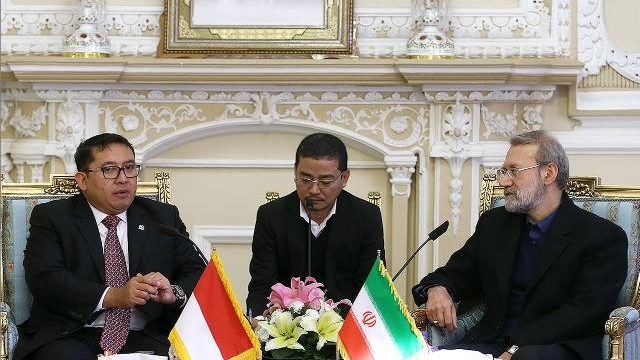 IRNA – Iranian parliament speaker on Saturday called for improvement of all-out relations, including trade ties, among the Islamic countries.

‘Development of trade ties among these countries will help boost cooperation (in other fields),’ Ali Larijani said in a meeting with Acting Speaker of the Indonesian People’s Representative Council Fadli Zon.

He referred to spread of terrorism in the region and the US warmongering policies while urging the Parliamentary Union of the OIC Member States’ (PUIC, PUOICM) move to resolve disputes among Muslim states.

Larijani praised Indonesia’s support for Myanmar Muslims against the oppressions of this country’s extremist Buddhists.

In the meeting, the acting speaker of the Indonesian People’s Representative Council, for his part, urged the Islamic countries to cut political and economic relations with Israel.

‘We are interested in promotion of trade ties with Iran,’ the official added.